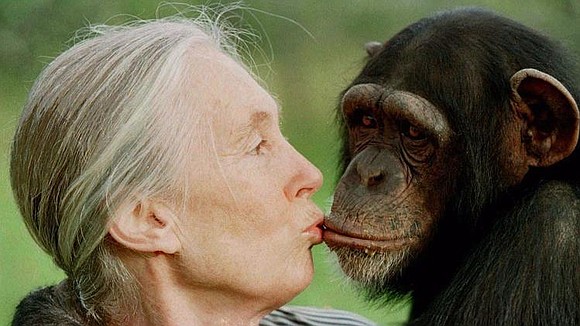 If you do nothing else this week, you owe it to yourself to see the documentary Jane, playing at the 53rd Chicago International Film Festival. Directed by Oscar-nominated director Brett Morgen (The Kid Stays in the Picture, Chicago, Kurt Cobain:Montage of Heck). the footage had been thought lost in the archives of National Geographic, but was discovered after 50 years. Morgen combed through 140 hours of footage to create a thoroughly comprehensive cinematic portraits of one of the most enduring figures and true superheroes of the conservation front, primatologist Jane Goodall. At 83 years old, she remains a tireless fighter for the conservation of wildlfe and criss-crosses the globe 300 days a year lecturing and raising money for her cause. In the film, much of it lovingly captured buy her late husband, Baron Hugo van Lawick, the famed National Geographic photographer, we see a ravishingly beautiful young Jane Goodall take her first tentative steps in the remote jungles of Gombe, camera in hand, eager to capture her first glimpse of the illusive chimpanzee. A disciple of pfamed primatologist and archeologist Louis Seymour Leakey,, Goodall set out to prove his theory that the study of primates in their natural habitat held the key to understanding the development of early man and human evolution. Through van Lawick's lens and Goodall's early still images, we experience her initial contact with the apes. The moment is at once thrill and mesmerizing. So too is the footage from van Lawick and later, from cinematographer Ellen Kureg with a penetrating score by Philip Glass. There are several breathtaking scenes, including the moment when Goodall and company arrive in the Serengeti, where her husband and she parted ways and each embarked on their own adventures. "It's as if unseen hand had drawn back a curtain to reveal this wondrous panorama." This is a highly personal and revealing work that lays bare the life, words and philosophy of one of the most revered figures of our time in the fight to save our planet and the species that live on it. Viewing Jane is one of the best uses of an hour and a half of your time that I can think of. The experience of seeing it will resonate far beyond. Go see it.