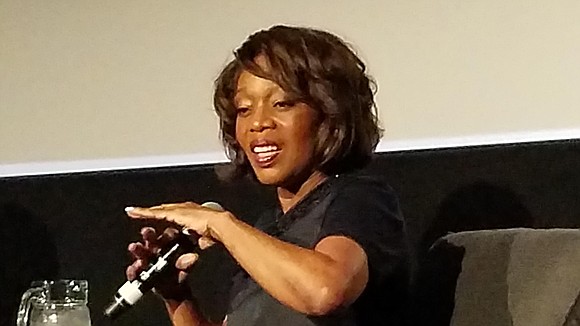 The conversation began with Taylor's own heartfelt reflections on her long association with Woodard, whom she often referred to as a 'sister' both personally and professionally. Indeed, the tribute presenters, which included Jussie Smollett of TVs Empire, enjoyed career-long associations with Woodard. Taylor recalled that she was an understudy for a role in which Woodard starred in Los Angeles and Smollett revealed that he first met her as a teenaged aspiring actor and that the two remained friends throughout his budding career.

The tribute featured clips from her numerous award-winning and nominated roles, including her 1983 Oscar nominated performance in Cross Creek, her Primetime Emmy Award winning performance in NBC’s Hill Street Blues, and Emmy nominated performance in St. Elsewhere, and her NAACP Image Award winning performance as Winnie Mandela in Mandela, in which she starred with fellow Artists for a New South Africa founder Danny Glover. She also appeared in Steve McQueen's Oscar winning film 12 Years A Slave in 2013, and starred in the HBO film Miss Ever's Boys, a role which won her a Golden Globe, Emmy and Screen Actors Guild Awards, among many others.

The Career Achievement Award Tribute was part of 21 Years of Black Perspectives at the Chicago International Film Festival. Founded with Spike Lee in 1997, its mission has been to present the diversity and richness of Black Cinema in Chicago and worldwide. This year's offerings included award-winning director Sam Pollard's Sammy Davis, Jr.: I've Gotta Be Me, the World Premiere of the documentary '63 Boycott and Nancy Bairiki's searing documentary The Rape of Recy Taylor, among others.

The festival has its final screenings Thurs. Oct. 26. Visit chicagofilmfestival.com for more information and ongoing activities of the festival.