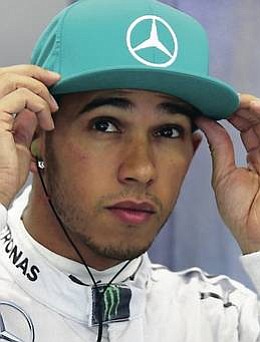 Lewis Hamilton, who can wrap up his fourth Formula 1 World Drivers’ Championship this weekend by winning the U.S. Grand Prix in Austin, Texas, said he doesn’t plan to take a knee during the playing of the national anthem in solidarity with members of the National Football League who are protesting police brutality.

Hamilton, a black Englishman, who lives in Colorado part of the year, said he’s focused on winning the championship although in earlier interviews he said he was considering kneeling during the Star-Spangled Banner to protest deadly shootings of unarmed black men and boys by police.

“In light of all that’s happening in this country right now, it’s super important,” Hamilton told the press room of the kneeling protests, according to several news reports. But as for taking a knee himself, Hamilton said, “I’m not going to give it too much thought.”

Hamilton’s answers didn’t seem to rule out taking a knee during the anthem, however, he was adamant that making a statement wasn’t his focus this weekend—he’s focused on winning.

Hamilton has supported NFL players kneeling during the national anthem on his Instagram page.

“If you don’t understand why Kaepernick knelt down for police accountability in this country, this is why.” Hamilton then ticks off the names of black men murdered by the police:

The names, which are next to a photo of Kaepernick, list all of the black men and women killed by police in the last several years. Kaepernick’s photo is next to photo of a kneeling Dr. Martin Luther King, Jr. and Rev. Ralph Abernathy.

None of the cops involved in the deadly shootings have been held accountable. They are usually suspended and when they return to work they collect thousands of dollars in back pay.

Hamilton is not the first foreigner to support protesting NFL players but he clearly is the best known. Soccer (football) players in Germany have knelt at games in support of NFL players.

The issue of NFL players kneeling during the national anthem has become a flash point since President Trump called the players ‘sons of bitches’ who should be fired.

Kaepernick has suffered because of his stand. No team will sign him as a quarterback. He filed a grievance against the NFL on Sunday, alleging owners have colluded to keep him out of the league.

Hamilton, who drives for Mercedes, has 306 points going into the U.S. Grand Prix. His closest competitor is Sebastian Vettel who drives for Ferrari with 247 points.

The U.S. Grand Prix will be held Sunday, October 22. Sunday is the biggest single day for NFL games.