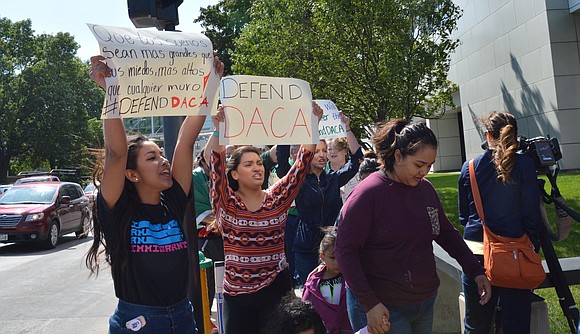 In response to President Trump’s announcement that he will be ending DACA (Deferred Action for Childhood Arrivals) in six months, Congressman Dan Lipinski (IL-3) is renewing his call for Congress to pass H.R. 496, the BRIDGE (Bar Removal of Individuals who Dream and Grow our Economy) Act, which would protect recipients of DACA from the threat of deportation. Rep. Mike Coffman (CO-6), the author of the bill, has limited co-sponsorship by Democrats to those who could also gain the support of a Republican co-sponsor. Four months ago, Lipinski became only the 13th Democratic co-sponsor when he was able to bring on Republican Rep. Fred Upton (MI-6) as a supporter.

“President Trump had said that he would ‘deal with DACA with heart,’ but now it is up to Congress to act to protect these young immigrants,” said Rep. Lipinski. “Congress can do that by passing the bipartisan BRIDGE Act which would ensure that DACA recipients continue to be protected from deportation. I have always focused on bringing people together to solve problems, so earlier this year I proactively reached across the aisle to secure Rep. Upton’s support for this bill, which enabled me to also sign on as a cosponsor. I am hopeful that others join in this bipartisan effort to do what most Americans agree is the right thing to do.”

The BRIDGE Act would grant those eligible under DACA three years of legal protection. DACA provides temporary protection from removal – as well as work authorization – to people who were brought to the United States as children, as long as they register with the government, pay a fee, and pass a criminal background check. More than 752 thousand individuals have received DACA authorization.

Under the BRIDGE Act, a current DACA recipient would receive provisional protected presence until the expiration date of his or her DACA status and could apply for continued protected presence prior to that expiration. Applicants would be required to pay a reasonable fee, undergo criminal background checks, and meet a number of eligibility criteria indicating that they came to the United States as minors, grew up in this country, have pursued an education, have not committed any serious crimes, and do not pose a threat to our country. An individual’s provisional protected presence and employment authorization would be subject to revocation by the Department of Homeland Security if it is determined that the individual no longer meets the eligibility criteria. The BRIDGE Act would provide provisional protected presence and employment authorization for three years after the date of enactment of the legislation.

Lipinski’s leadership on the BRIDGE Act has drawn praise from those concerned about the plight of those who have been given an opportunity under DACA.

“The North American Institute for Mexican Advancement (NAIMA) understands that building support for immigration issues also requires the support of centrist legislators such as Congressman Dan Lipinski,” said NAIMA President Sergio Suarez. “After meeting with the Congressman, NAIMA applauds his endorsement of the Bridge Act in support of DACA youth. Rep. Lipinski’s support, along with his work to identify a Republican colleague to join as a co-sponsor of the bill, is a significant move in support of immigrant families.”