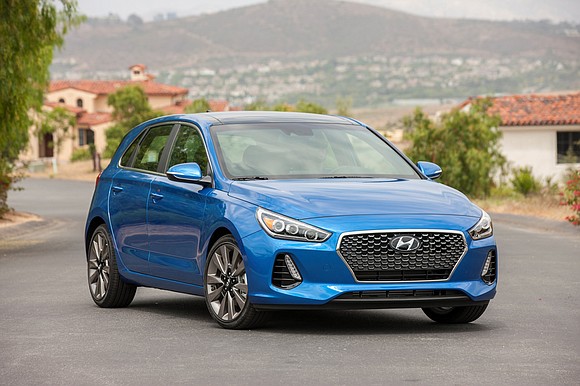 Torrey Pines, Calif. – It was the frosting on the cake. The last day of our stay here, we got the chance to take a brief test drive in the 2018 Hyundai Elantra.

This is an important car for Hyundai, accounting for 20 percent of its sales. Since 1991, almost three million copies have been sold. The Elantra has been so successful that the sedan is built in the U.S.

Elantra GT had standard 17-inch alloy wheels while the Elantra GT Sport came standard with 18-inch wheels A single character line ties the headlight and taillights together and the window opening area was surrounded by refined satin chrome trim.

At the rear, a standard rear spoiler sat atop a wraparound back glass. LED taillights and brake lights gave a striking rear facing light signature and the dual exhaust outlets on the Elantra GT Sport shouted fun-to-drive.

Inside was a horizontal layout. There was a standard eight-inch display screen that looked like an old flip phone the way it sat on the dash. But its face looked like a smartphone. It was a touch screen.

By the time we arrived in the staging area only Elantra GT models were left so that’s what we test drove. We grabbed one with an automatic transmission and headed north but first we went south.

The interior was quiet, spacious and well executed. Everything was easy to touch, easy to read and easy to use. It was comfortable, very maneuverable and it had 55.1 cu. ft. of cargo space with the rear seat folded.

When we looked at the list of equipment, we found the car had blind spot detection with rear cross traffic alert, push button start, a TFT display between odometer and speedometer, heated front seats, LED headlights and taillights, leather seating surfaces, a navigation system, wireless charging and a premium audio system. Remote start, infotainment services and multimedia map update were complimentary for three years. And our test car had a panoramic sunroof

That was a lot of stuff in a little car. And it got better. The 2018 Hyundai GT was fun to drive. The suspension was nicely tuned, finding the sweet spot between harsh and firm. The engine was nicely tuned too and combined with the transmission the powertrain dealt well with the mountains here, though the engine did strain a little getting up and over the hills. And we particularly liked the handling, it was precise.

Unfortunately, we ran out of time and had to get to the staging area for lunch and from there to the airport. We can’t tell you how much the car cost because it had not been announced at the time of the test drive. It was set to go on sale in late summer.