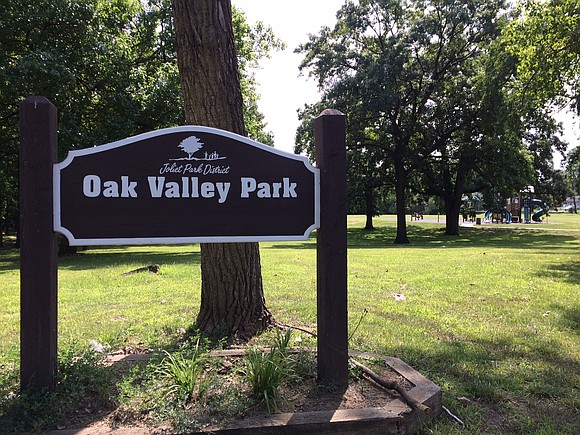 A group of concerned Joliet residents have petitioned the Joliet Park District to rename Oak Valley Park after toddler Sema’j Crosby who was found dead in her home in April. Brock Stein

The public will have 3 months to weigh in on whether or not the Joliet Park District should re-name a park after a deceased Joliet toddler.

A petition presented to the park board in July proposes to rename Oak Valley Park after 17-month old Sema’j Crosby who was found dead in her Joliet Township home in April.

The name change was suggested by the Justice for Sema’j Action Committee which presented a petition with over 500 signatures at the park district’s July meeting.

Amy Sanchez, a spokesperson for the group, said that that a committee that had coalesced soon after Crosby’s death to raise funds for her funeral expenses and for her surviving siblings discussed several ways to preserve the memory of the toddler.

Initial talk centered on a new park as well as a peace garden before a consensus to rename an existing park was reached.

Sanchez said that the park naming would be the most visible reminder of Crosby’s short life and the best way “to keep her memory alive.”

So far, Sanchez said that the feedback she’s received has been favorable.

“Everybody is very receptive to it,” she said. The group is aware of the specific criteria laid out by the park district for naming a park which could be a hurdle she said.

“We know that the park district has a strict policy on renaming parks.”

Sanchez said that Crosby’s short life would qualify. Though tragic, Sanchez said that her death has been a catalyst for reforms in the state’s child welfare system which she sees as her lasting contribution not only to the Joliet community but state-wide.

“In her short little life and her death she has impacted so much,” she said.

Other criteria for naming a park includes: “The individual may be living or deceased; No parks and recreation facility or property can be named after any public official currently holding office; and Their name cannot duplicate the name of another park in the Joliet Park District system.”

He said that a sign will be posted at Oak Valley Park this week announcing the 90-day comment period.

During the comment period, residents can send their feedback either via email to him or any of the park district board commissioners; via letter; or during the public comments portion of park district meetings which are held at the Inwood Athletic Center, on the fourth Monday of each month.

The Joliet Park District offices are located at 3000 W. Jefferson St. in Joliet, 60435 (Inwood Athletic Center). Email addresses for park district officials can be found on its website, www.jolietpark.org.