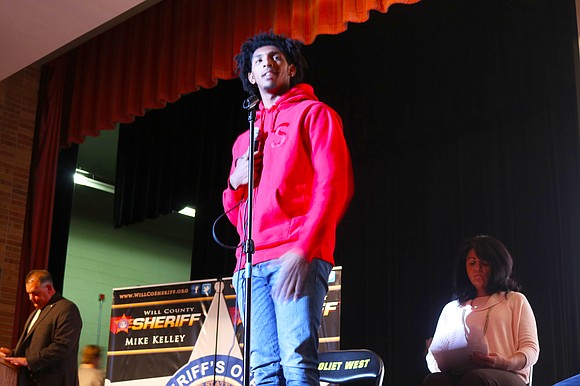 Provide a venue where people can sit in on a panel featuring current and former athletes, conduct raffle drawings, offer a plethora of tips and words of encouragement, and have the fortune of holding the program right after school ends and chances are people will show up by the dozens.

For the newly formed Will County Substance Abuse Prevention Coalition, it certainly proved to be true at the group’s parent and youth forum, held recently at Joliet West High School.

The new coalition, which is comprised of representatives from Will County, community groups for youth and adults, health, business, Sheriff and Police organizations throughout Will County hosted the recent event to educate families on the importance of being drug and alcohol free. Like other coalitions, the group intends to centralize efforts to keep the community and youth safe from drugs and alcohol.

Cherry Powell, coordinator of the coalition and the mother of Rodger Powell Jr., one of the panelist and a member of the NBA mother’s group really helped the coalition make this first event a big success, said Jayme Casimere, coalition member and chair of the events committee.

Thayer took to the stage telling them he wants them to be proud of where they come from.

“We are the city of Champions because we put a lot of effort into everything that we’re able to accomplish or asked to do,” he said.

Thayer, who is a Joliet native and a graduate of Joliet Catholic High School, serves as a member of 1985 Super Bowl Champion-winning Chicago Bears. He wants to see the people of his hometown thrive and remain strong.

Thayer acknowledged the pressures that student-athletes face in school and said it’s not easy.

“I went to a college [where] the academics were hard and sports were harder,”

Thayer said. “I played for a head football coach in Mike Ditka [who] he pushed us to our limits each and everyday, but I loved every second of it. I loved the support it gave my family, and I love the support my family gave me.”

Collins said he is glad to share some of his feelings with the crowd in hopes of inspiring them to live “amazing lives.”

Collins urged the crowd to understand that youth in today’s world face a different challenge than he had and said education is important.

“You live in an instant information society, and things happen so fast,” he said.

Collins, who is an Olympian and a former National Basketball Association first round draft pick, grew up the son of a sheriff in southern Illinois. He said the secret to “doing the right thing” is to make sure you’re hanging out with the right people.

“Everyone in life who has ever been successful has never gotten there by themselves,” he said.

Looking into the crowd, Payne thanked everyone for inviting him to speak. He acknowledged the pressures community youth feel to want to be seen or known and stressed that what is cool is doing the right things.

“Now, what you see on TV may be different, but what’s cool is being obedient, being disciplined and listening,” Payne said.

Payne said listening is the key—no matter how old you are.

“My mom, she listens,” he said. “My mom, she’s extremely older than me, and she still listens. It’s kind of crazy because you would think she doesn’t listen much. That’s my mom. I got to listen to her… You’re never too old to listen. Someone [always] has more wisdom than you.”

Payne attended Murray State and hoped to become a basketball coach before entering the draft to play in the NBA. Now, entering his third season, he is living what called “his dream” playing for the Chicago Bulls.

“You don’t know what they have to say, but you got to listen to hear them,” he said.