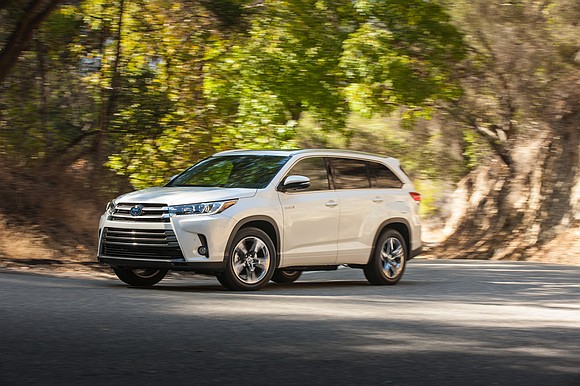 Toyota continues to deepen its offerings of hybrid vehicles. This time it worked its engineering guile on the Toyota Highlander.

There was a Highlander Hybrid last year but this model year the automaker has equipped the vehicle with a new engine and transmission, more safety features and it has expanded the model range to four trim lines which is up from two last year.

This is the third generation of the Toyota Highlander and it is entering its fourth year. In other words the changes are subtle and the sheet metal remained pretty much the same.

Still, the grille had a painted chrome finish. The taillights have been redesigned and featured standard LEDs and on the upper trim lines, like our test vehicle, the rear bumper featured chrome garnishes. New exterior colors were added and inside the Highlander had five USB ports

The 2017 Highlander Hybrid had a new 3.5-liter V6 with a high torque electric drive motor generator that made a total of 306 horsepower. It was mated to an electronically controlled continuously variable transmission.

Like most CVTs this transmission sounded slightly sluggish but it wasn’t. Acceleration was great, response to driver input was good and the suspension was firm without being harsh.

This powertrain had an EPA rating of 29 mpg in the city, 27 mpg on the highway and 28 mpg combined. For a small yet three rowed crossover, we thought that the mileage was very good.

Spreading through the product line is Toyota Safety Sense™ P. Toyota is branding this as a highly advanced driver assist technology package. Using radar and a monocular camera sensor to detect a preceding pedestrian or vehicle and lane markers, the system automatically helps mitigate collisions.

We’ve always felt that on larger crossovers or sport utilities blind side waring should be standard equipment. And though it wasn’t the size of a full-size sport utility, blind spot warning was much appreciated on the 2017 Toyota Highlander.

We had the Limited and did not experience the LE and XLE, two new trim lines for the Highlander Hybrid. That makes four with the Platinum model. All are available with front-wheel or all-wheel-drive.

Our 2017 Toyota Highlander Hybrid Limited had AWD-i. Toyota said All Highlander Hybrid models come equipped with Electronic On-Demand All-Wheel-Drive System with intelligence as standard. Instead of transfer gears and a driveshaft to the rear wheels, this AWD-i system employs a second, independent electric motor to drive the rear wheels when needed to help maintain optimal traction. Luckily we had dry pavement, well it did rain, during our week-long test drive.

Our Highlander Limited’s seats were comfortable, there was soft blue ambient lighting and the dashboard had a shelf underneath. It is not as nutty as it sounds, you have to see that it to know that was not intrusive or cumbersome or weird looking. In short, it worked.

Second row seats were captain’s chairs, all seats were trimmed with perforated leather and the front pair were heated and cooled. There was a premium audio system, bird’s eye camera and a moonroof, 19-inch wheels and puddle lamps.

The usual creature comforts were there: satellite radio, Bluetooth, voice controls, a navigation system, and an infotainment system.

Toyota’s Highlander Hybrid lineup now has four trim packages and eight models. That’s a lot to choose from. Our tester had a base price of $44,760 add body side molding and carpet, plus the $940 freight charge and the sticker came to $46,134.