“Rise of the Jumbies” by Tracey Baptiste 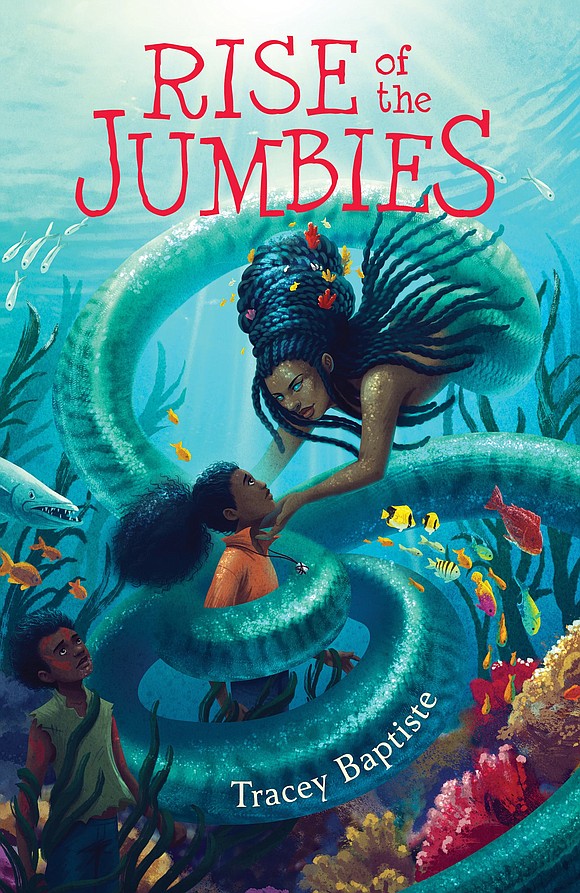 Rise of the Jumbies

What lives beneath the waves?

Fish, of course. Seahorses, clams, lobsters and whales, turtles and mermaids, too. You’d be surprised at what lives under the sea, but in the new book “Rise of the Jumbies” by Tracey Baptiste, there are also things that you don’t want to know about…

It’d been bright and sunny on the day the waves thundered.

Everyone along the beach scurried inland toward the village. Parents snatched their children and ran, but Corrine wasn’t scared. She knew instantly what was happening. She’d been through something like this before.

As she watched Papa’s boat rock in the waves, Corrine recalled the undersea battle she’d had just months before. Her mother’s sister, Severine, was a jumbie, and she’d threatened the people of Corrine’s Caribbean island home. Corrine fought Severine and won, but it hadn’t been easy. She knew in her heart that Severine could return.

And then the children started to disappear.

At first, her neighbors thought she was to blame; Corrine was half-jumbie, and everyone knew it. She had to make them believe that she wasn’t bad, that it wasn’t her fault when the sea took children. To do that, to fix everything, the island’s white witch said Corrine had to go beneath the water.

As the villagers presented gifts to the sea, Corrine let the waves take her to Mama D’Leau, the powerful ruler of the jumbies. The white witch said that Mama D’Leau does what she wants. Never ask more than one question, Corrine was told. Don’t try to be clever, and be ready to grant her wishes. Corrine knew that Mama D’Leau could be generous, but not often.

She only wanted the safe return of the island’s children, who’d been snatched by someone – or something. She didn’t want to meet with the fearsome Mama D’Leau, but there was no other way. Corrine had to risk her own life and memories, but could she risk her friends’ lives, too?

Put “Rise of the Jumbies” against your ear, and what do you hear? Not the ocean, but you may hear your child ask for this adventure-filled book. Just be aware that you might need to dive in to help with it.

Packed with West African and Caribbean tales, this book takes young readers both underwater with mermaids and to a forest of enchanted beings. Kids who can’t get enough of legends or fantastical stories will be wide-eyed at both story and action, the latter of which is truly heart-pounding but can also be confusing: there are many fine characters in author Tracey Baptiste’s tale, but when several of them swirl in a single scene, it can be messy and in need of sorting. Parents may also want to guide youngsters to an understanding of subtle slave ship references that constitute a well-done story-within-a-story.

Savvy readers ages 8-12 may be able to jump into “Rise of The Jumbies” feet-first without reading its predecessor, “The Jumbies,” but I’d recommend starting there anyhow. Try that, and your child can wave “hello” to her next favorite series.