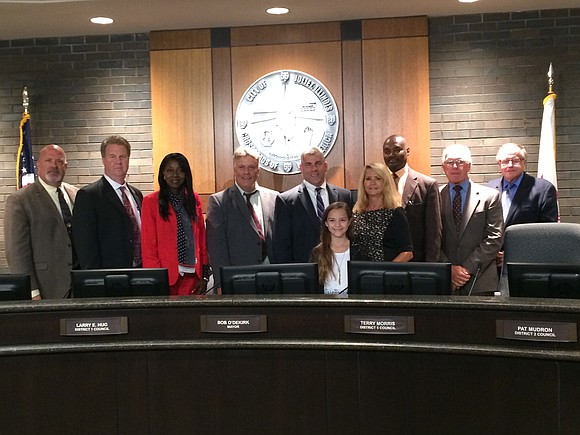 Danica Ward, center, was recognized by the Joliet City Council for her efforts to collect supplies following Hurricane Harvey. Photo by Brock A. Stein

Inspired to pitch in to help the residents of Houston, Texas following the devastation of Hurricane Harvey, 10-year-old Danica Ward of Crest Hill grabbed her wagon and headed out.

Ward went door to door in her neighborhood looking for donations of food, water and cleaning supplies to help with relief efforts that were organized by Cadence Logistics and the City of Joliet.

Ward was recognized by the Joliet City Council this week for her work with a proclamation from the mayor.

About 39,000 people were driven out of their homes and a third of the city of Houston was flooded in the wake of the record category 5 storm that made landfall in late August.

Joliet council woman Jan Quillman said that Ward “took it upon herself” to solicit the donations by going door to door. She also received donations from family and friends to purchase more supplies she said.

All told, Ward and her family delivered two vehicles full of supplies at the city hall drop off site.

About 75 city employees volunteered their time during the 9-day collection period and helped load donations on to 53-foot semi trailers provided by Cadence Logistics.

Mayor Bob O’Dekirk said that in total Cadence drivers delivered four trailers full of supplies to the Houston area. In addition to donations from city residents, the mayor said that the supply drive attracted donations from outside of the city as well.

“It was a great effort,” said O’Dekirk.