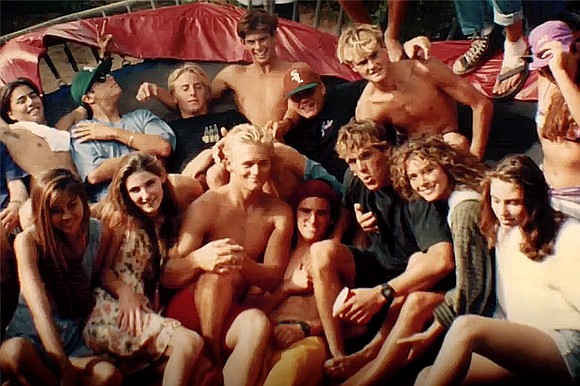 From an Executive Producing team led by Robert Redford comes one of the best sports movies in a generation, Momentum Generation, which is screening in the final days of the 17th edition of the Tribeca Film Festival. The film tells the story of a rag-tag group of surfing enthusiasts from some of the unlikeliest coastal backwaters and socio-economically starved communities and some of the unlikeliest places (try Chicago) to spawn an interest in the then-unlikely sport of surfing. Their various backgrounds were all but ideal. In fact, most of them grew up on the wrong side of the tracks. More than one of the subjects might well have spent a lifetime of dodging the law or in jail, were it not for the love of surfing.

Surfing is probably one of the most dangerous endeavors you can engage in, but it has spawned a following of cult-like enthusiasts around the world. All that's needed to participate is a wooden surf board, not much bigger than an ironing board, and a steel-willed daring to brave the elements and possible death at the hands of an unforgiving sea. Using archival footage, much of it shot by the participants themselves, the film traces the rise of the sport from a mere personal interest into the big moneyed international phenomenon it has become today, complete with sponsorship, corporate endorsements and big money.

The core subjects of the film are its presumptive progenitors, Kelly Slater, Rob Machado, Shane Dorian, Taylor Steele, Kalani Robb, Paul Roach, BenjI Weatherly and Pat O'Connel, who by happenstance all came together in their early teens in the home of Weatherly's mom on the north shore of Oahu in the early '90s. Over the next 20 years, they nurtured their dreams of becoming the world's premiere surfers. Field by their camaraderie and fierce competitiveness, the hapless crew managed to rise to their top of their sport on the world stage. Their growth in expertise mirrored the rise of the sport from a mere amateur endeavor for daredevils, to a big money proposition, which brought with it rivalry and broken friendships. Just as the Beach Boys rose to fame romanticizing the surfer lifestyle in song, so did the careers of these young daredevils. Their ascent was not without tragedy. The specter of death arose just as the zenith of surfing was on the horizon. The previously tight-knit crew unraveled under the weight of fame and fortune. Directors Jeff Zimbalist and Michael Zimbalist weave a masterful cinematic journey combining archival footage, private photos, personal interviews and early TV film and video to create a comprehensive survey of the sport that is both informative and inspirational. Much of the early unedited and some of the most poignant and telling material in the film is supplied by the unedited footage by surfer Taylor Steele, then a burgeoning amateur filmmaker and one of the original surfing posse. MOMENTUM GENERATION earned second place in the Audience Award Documentary category at this year's Tribeca Film Festival. Its a film that merits more than a single viewing as a testament to what sincere commitment and loyalty to an ideal and to one's comrades can accomplish.