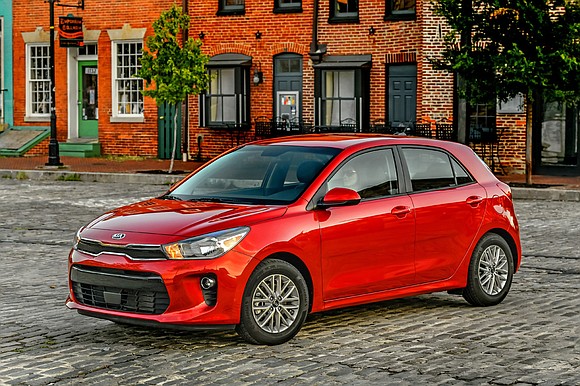 Kia tinkered with the 2018 Rio 5Dr; and the moderate changes were definitely for the better. First, 5DR is code for hatchback; that fifth door is the tailgate.

The Kia Rio 5-door is now 160.0 inches long, up from 159.4 inches). It had a longer wheelbase, 101.6 inches, and more upright A-pillars. It was lower and wider than the outgoing model. Although slight, the different dimensions gave the Rio a sleeker look.

Kia said the rear of the Rio is now more upright thanks to shorter overhangs and thinner, more expressive taillights. Like the front-end, the rear view of the car is wider, furthering a sense of stability and presence

This was an outstanding subcompact. The engine was the carryover 1.6-liter four-cylinder engine that used an aluminum valve cover and block to reduce weight. It made 130 horsepower and 119 pound-feet of torque.

A manual transmission is available but I had the six-speed automatic gear box. With this setup the 2018 Kia Rio five-door had an EPA rating of 28 mpg in the city, 37 mpg on the highway and 32 mpg combined.

I enjoyed the Rio. It had some spunk; it looked good and it was easy to drive. I think the little extra length in the wheelbase provided a smoother ride and some rode stability.

The automatic weighed 2,714 lbs. Engineers say they sought to refine the driving experience with more agile handling and improved ride comfort, and this was achieved by designing a fully-independent MacPherson strut front suspension and a torsion beam rear axle. The revised spring and damper setup made the Rio more compliant and comfortable.

I remember going through a curve loaded with mounds of that patchwork asphalt and fully expected some wheel skip. But it didn’t happen; I was really impressed. Acceleration was pretty good and handling was great. It wasn’t until it was time to return the car that I noticed a button to put the Rio in sport mode.

The front seats were comfortable. I climbed in the back seats and found that the Rio five-door’s flat roof provided plenty of headspace. However, leg room was a little cramped. But two points should be considered: the front seats had not been slid forward even a little bit and the Rio is a subcompact car. It’s like how much rear leg room can you expect?

From the backseat I could appreciate the color scheme. It was black with Cordova trim. And the instrument design was so clean and simplistic that the color scheme really stood out.

There was an information touch screen, satellite radio, voice controls and Bluetooth. The car had an auxiliary and two USB jacks and a 12V plug. I had the Rio EX which was top of the line. It featured forward collision warning and autonomous emergency braking which I found mildly surprising in a small car.

This feature is rapidly being adopted by a lot of smaller cars and crossovers. But there was no CD player; they are being discarded by a lot of brands. We’re in the last days of CD players as they go the way of audio cassette players in cars and trucks.

There was no push button entry and no push button start stop. This test car had what’s becoming old fashioned: a key and an ignition tumbler to put it in, turn and start. I think that helped keep the sticker for the 2018 Kia Rio 5DR subcompact car at $20,225.