“How Sweet the Sound: The Story of Amazing Grace” 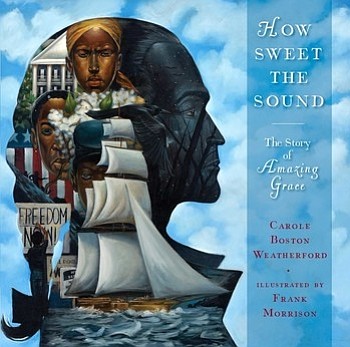 In church, you sing a lot of songs.

Some are just for Sunday School, and you clap when you sing them. Others make you dance right in your seat. And some songs you sing in church are very old and have a quiet, hidden meaning. In “How Sweet the Sound” by Carole Boston Weatherford, illustrated by Frank Morrison, you’ll learn about one song that feels a lot like a prayer.

John Newton was not a very nice man.

He was a brawling sailor, and that was why he was so mean: he had to be tough, and that meant fighting and swearing and hurting people. He’d been doing it for years and he didn’t have plans to stop. Toughness was in his blood.

But then, one night, there was a storm and John was at the wheel of the ship as she tossed back and forth on the waves. The rest of the crew was frightened and, truthfully, so was John. He began to think about all the things he’d done in his life. He remembered how much he loved his mother, and he recalled when she died.

No, John was still nice then. He met Mary, the woman he loved, and they had plans for the future until the Navy nabbed John and forced him to enlist.

Ah, there’s where John became a cruel bully. It happened aboard a ship, where he worked hauling humans over the ocean to bring them to slavery. Oh, John suddenly understood – and he began to pray.

He prayed when he bailed water. He prayed as he “plugs leaks.” He talked to God while he was at the helm of the ship. He prayed and prayed until the sun peeked over the horizon on wet but peaceful sails. He prayed because the crew still wasn’t out of danger and he kept praying until the ship reached land.

God spared John’s life and, in gratitude, John became a preacher and spoke out against slave ships. Then he wrote a song that people of many faiths have leaned on in times of trouble.

You’ve sung the words countless times. You’ve heard the song in many places. But did you know the true story of the classic hymn?

Most people haven’t, but in “How Sweet the Sound,” author Carole Boston Weatherford tells it with couplets more powerful than a storm at sea; indeed, this book is little more than a poem written in descriptive style, but sparsely, which lends more weight to each careful word. The tale itself – that of John Newton – is all true, and that’s explained in Weatherford’s Author’s Note near the back cover. Be sure you read that, too. It makes an extraordinary story even more… amazing.

With beautiful artwork by Frank Morrison, this book is great for children ages 4-to-8 and may be a Sunday School winner for kids and adults. “How Sweet the Sound” could make your soul sing.