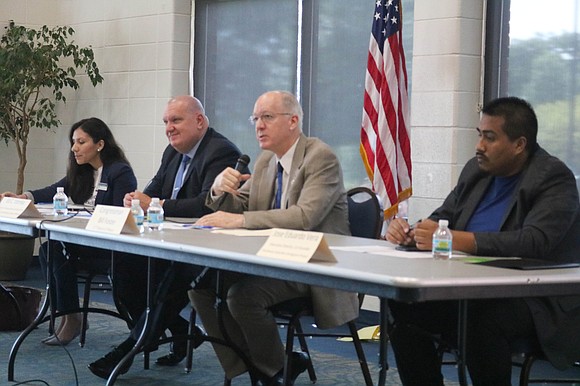 Area residents met to discuss ways in which the community and the courts are flexing their muscle to fight ICE and Trump immigration policies.

A panel recently gathered in Aurora to discuss immigration policies and their impact on the area.

The forum aimed to shed light on immigration policies and the impact to the community.

The Congressional 11th District, comprised of parts of Will County, is the home to people of many different backgrounds.

Foster said it’s been troubling to see the current administration and its efforts to halt legislation and its impact to the community.

Foster touted, among many efforts, his record for supporting the Development, Relief and Education for Alien Minors Act, a measure introduced in 2010 that could have granted legal status to certain undocumented immigrants brought to the country as children and who went to school.

Vera recounted the first Immigration and Customs Enforcement raid in the area brought to the attention of the Southwest Suburban Immigrant Project in May and wanted it to be clear that families arrested in Illinois earlier this year are not criminal aliens, or collateral arrests, and that everyone in Illinois deserves due process.

Around that time, Southwest Suburban Immigrant Project issued a community alert and conducted a Facebook live event with a Know Your Rights presentation.

“Because of that, we were able to identify many of the families that were impacted in our community through that ICE raid,” Vera said.

“We know what ICE is doing in our community,” Vera said. “ The community’s response has been very active. You’ve seen different ICE raid response networks forming. There’s one forming in Aurora, one in Joliet, there’s some in Bolingbrook. So, that’s our call to [action for] the community.”

Yohnka acknowledged that for years, the country has had a policy for situations in which families are separated and said children were placed in the care of an advocate or another family member.

“There’s nothing that fosters a better immigration program,” he said.

Among those at the event was Cheryl Arevalo of Romeoville. She wanted to know what action, if any, has been taken to hold Trump and the federal administration accountable for failing to reunite families ahead of the deadlines.

“The judge has never really come down them on with both feet, I suspect, in large measure, in an effort to try and attempt to move the government to continue to act, to continue to reunify as many families as possible,” Yohnka said.

To date, there have been no findings of contempt.

“We’re in a situation now where we have an administration and congressional leadership that’s lost its moral compass,” Foster said. “In those situations, we rely on the third branch of government, the courts. That only works when you have organizations, like the ACLU, that will go into courts and fight on behalf of what’s right.”