Walsh views state of the county as bright 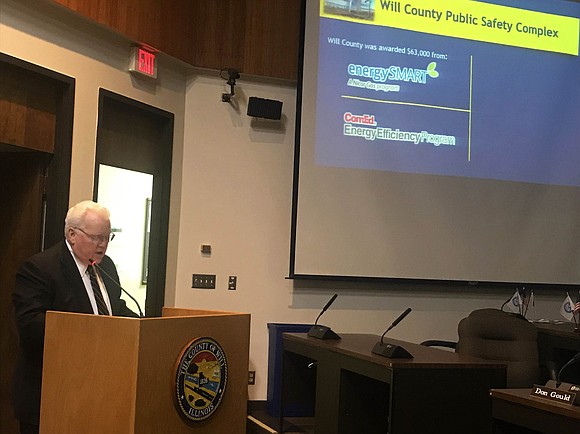 Joliet - Joliet’s business future is bright according to Will County Executive Larry Walsh, Sr. in his State of the County address to the County Board. Walsh pointed to new developments in the downtown area and how it’s leading to Joliet becoming an ideal place to do business.

“This is a very exciting time as we have hosted many ribbon cuttings and groundbreakings for new buildings over the last several years,” Walsh said.

Leaders have taken many steps to consolidate the functions of county government, streamline operational costs and provide services to residents in a convenient, efficient manner.

Walsh said many of the smaller projects laid the foundation for the large-scale projects that are changing the landscape of Will County.

In January, leaders celebrated the opening of the Laraway Communications Center, a new public safety complex.

“The centralizing of these public safety offices into one campus has been challenging, but will meet our needs well into the future,” Walsh said.

The facility is home to many Sheriff’s Office operations formerly spread over several locations.

“We are making great progress on the new $210 million dollar county courthouse on the site of the former First Midwest Bank building,” Walsh said. “Considerable work has been done on this building, which will be 10 stories and contain 38 courtrooms.”

Plans are still in the works for future construction of a new Will County Health Department building.

“I am proud to report that the health department, led by executive director Sue Olenek and her team, has completed an inaugural, comprehensive strategic plan that will assist in leading the operations of this agency in the years ahead,” Walsh said.

Walsh stressed that county government is always working to improve the quality of life of its residents.

“With our federal, state and local partners, we have made progress on redeveloping the Ridgewood and Fairmont neighborhoods.”

Since 2004, Will County has invested more than $8 million in grants to replace aging sewer and water systems in the Ridgewood area and connect them to the city of Joliet.

To date, more than $1 million in federal dollars went toward creating a housing rehab program in the area.

The county remains committed, as well, to the Fairmont Home Repair Assistance program, Walsh said. Under the administration of the Will County Center for Community Concerns, Will County invested more than $1.3 million.

“Significant improvements have been made to 17 homes and another 10 homes are expected to be completed by the end of 2018,” Walsh said.

Drainage problems over the years have stressed the Fairmont area. At the June Will County Board meeting, officials authorized payment estimated at $6 million to help address those drainage concerns.

“We have already expended over $1 million toward that goal, which is expected to be completed by 2022,” Walsh said.

Walsh touted, among several accolades, the region’s reputation as a great place to live, work, raise a family and do business.

“Our communities are safe, our schools are high quality, and our business climate is friendly,” Walsh said. “County government is working diligently to maintain quality of life, while growing the regional economy.”

Walsh urged community leaders to recognize that they must prepare for the future and act responsibly to address the challenges of growth.

“Will County led the metro-Chicago region in the percentage of jobs added between June 2017 and June 2018,” Walsh said.

The number of jobs during this timeframe grew by three percent, or more than 8,000 jobs, with new positions added primarily in wholesale trade, healthcare and transportation/distribution/logistics industries.

Walsh hopes the State of Illinois will do its part to make full payment of local government distributive funds to county and municipal governments. Will county’s share last year was reduced by $2.4 million.

“Our future remains bright, but only if we all work together to achieve the ambitious plans we have set,” Walsh said.