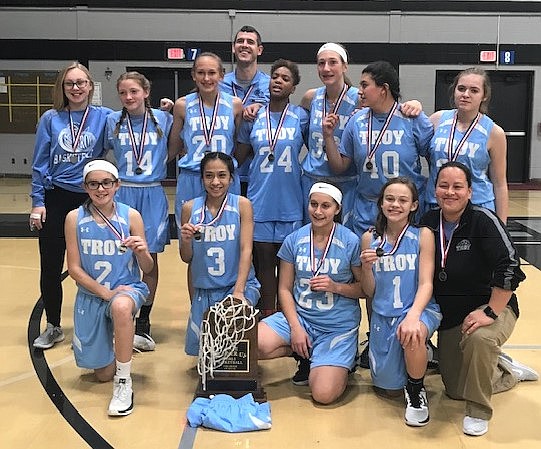 This is the second year in a row the team played for the state title. The Lady Trojans, led by Coaches Matthew Stortz and Serena Cruz, fell just short this year of defeating the Alton Redbirds for the title. Over the season, Stortz said, the team beat many undefeated teams.

“The great thing about this team,” he said, “is that each and every one of them plays a pivotal role on the team. They are all willing to step up to the challenge when called upon. They rarely get down on themselves or each other and maintain an even keel throughout every game.”

Stortz said he is grateful to have had the opportunity to coach such a great group of athletes.

“I have had the privilege and honor to coach a fantastic group of seventh grade girls this year,” he added. “Each and every game, they worked hard, got better, and fought until the very end. These girls finished the season with a 26-4 record. Taking second place wasn’t the ideal outcome we had hoped for, but the heart, effort and determination I saw in all of these girls was something I could not be more proud of. They gave it everything they had and never got down on themselves. I know great things will continue to come to this phenomenal group of girls.”