Second year in a row the team took the title 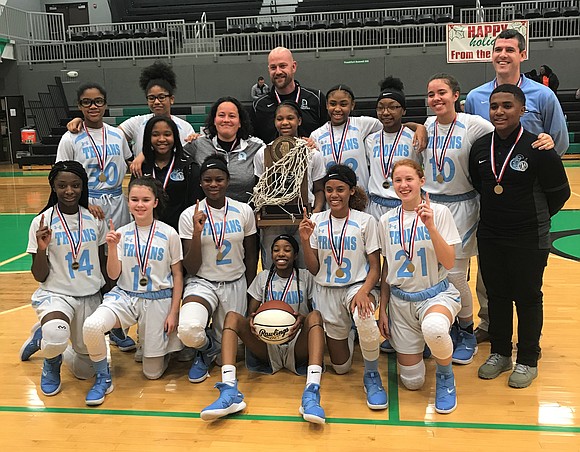 This is the second year in a row the team placed first at the state championship, after taking the top spot last year as 7th graders.

“It was an awesome game to be a part of,” Head Coach Serena Cruz said that night. “We were down at some points, we were up at some points. . . the girls never gave up. They put their hearts on the floor, and it paid off.”

“These girls are definitely making their mark on Troy’s basketball program, and I couldn’t be more proud of them,” she said.

“We set a goal at the beginning of the year to win state again,” Cruz said, “and it all paid off.”

Cruz said the team’s nickname is, “Blue Smoke,” because they covered other teams like smoke.

“They were all over them,” she said.

Cruz said the team’s offense was outstanding, but it was the defense that won the game in the end. She also described Assistant Coaches Matt Stortz and Mark Peter as “phenomenal,” and thanked the parents for their support throughout the season.

“The eighth-grade girls basketball games have been so exciting to watch this season,” Troy School District 30-C Director of Athletics and Activities Meagan DeGroot said. “I have enjoyed watching these girls since sixth grade, and they have matured so much. They play a flawless game of basketball together. I could not be more proud of their level of sportsmanship, and I look forward to watching each of them play in high school.”