COMMENTARY: White churches have a moral responsibility to stand up 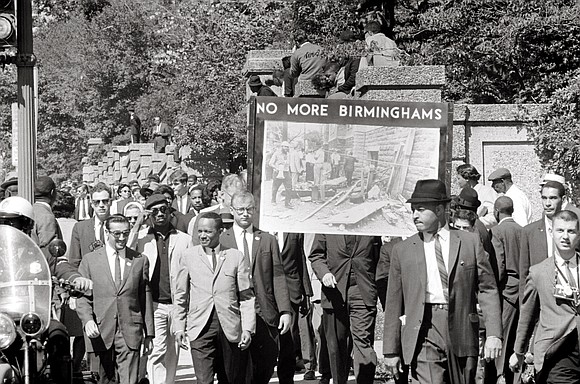 Congress of Racial Equality and members of the All Souls Church, Unitarian located in Washington, D.C. march in memory of the 16th Street Baptist Church bombing victims. The banner, which says “No more Birminghams”, shows a picture of the aftermath of the bombing. (Photo: US News & World Report Collection, US Library of Congress / Wikimedia Commons)

In 2019, we will commemorate 400 years since the first 20 slaves were transported by ship from Africa by white slave traders and landed in Jamestown, Va.

This is virtually all about equity in a home, the leading source of middle-income wealth. African-Americans still suffer from de facto segregation, after years of being red-lined from decent neighborhoods.

In the financial collapse, African-American households suffered the worse. Black unemployment rose twice as much as white unemployment in the Great Recession. Middle-class black families, lacking inherited wealth, were targeted for the most aggressive and leveraged home loans. When the bust came, they were the most at risk and suffered the greatest loss of homes.

The wealth gap is not erased by educational attainment, by full-time employment, by getting the right occupation. The typical black family with a head of household working full time has less wealth than a white family whose head of household is unemployed. Median wealth for a black family whose head has a college degree is about 1/8 that of a median white family similarly educated.

African-Americans are constantly told to pull themselves up by their bootstraps. In the black church, for example, ministers repeatedly preach the need for discipline, self-reliance, faith and hard work. Yet even those who succeed still remain behind.

During the recent midterm elections, I was constantly asked whether African-Americans would vote in high enough numbers and margins for Democrats so that candidates white and black had a chance to be elected. Democrats seem almost satisfied if 20 to 30 percent of whites turn out to vote for black or progressive white candidates.

What responsibility do white people have to register and turnout for progressive black and white Democrats running for office?

The nation is facing many morally relevant social, economic and political crises — voter suppression, income and wealth inequality, criminal justice reform and climate change — that now pose an existential threat to the next generation. Why does the white church remain so silent in the face of these mounting crises and denial of justice and opportunity?

In Birmingham in 1963, with dogs biting children, high-pressure fire hoses knocking down peaceful protesters, bombers blowing up churches and Dr. King in jail, many white church leaders chose to attack Dr. King’s non-violent methodology rather than to fight for a non-discriminatory Public Accommodations Act.