A Look Back: Lockport's State Street Construction Project in 2018 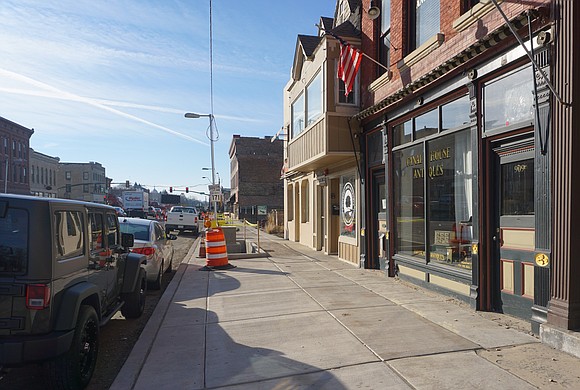 Lockport - As 2018 draws to a close, the City of Lockport is looking back at the progress made on its landmark State Street construction project and anticipating the completion of construction in 2019.

The project, which began in early 2018, focuses on alleviating traffic congestion, implementing safety improvements at the intersection of IL Route 171 (State Street) and IL Route 7 (9th Street) and beautifying the downtown area to attract visitors and businesses

"We're thrilled with the improvements made on the State Street project in 2018 and are excited for our residents and businesses to see the finished project next year," said City Administrator Ben Benson. "This project is going to revitalize and enhance Lockport's historic downtown for generations to come."

"From infrastructure improvements to beautification, this project is going to make a substantial difference in the look and feel of downtown Lockport," said Public Works Director Brent Cann. "We're very grateful for the support of our residents and business community while these improvements are being made."

In early 2018, construction began on the west side of State Street, with the installation of storm sewer lines, underground electrical infrastructure, new sidewalks, curbs and on-street parking as well as new watermains, which replaced infrastructure installed before 1960.

Efforts to reduce traffic congestion and improve safety include the addition of left turn lanes on both northbound and southbound State Street, which creates a dedicated turn lane, improving traffic flow. Additionally, bump-outs at the intersections of 8th, 9th, and 10th Streets will serve as traffic-calming elements that encourage slower traffic through the downtown area, while preserving on-street parking on the 800 and 900 blocks.

To ensure pedestrian safety, the vaulted sidewalks on State Street that had not previously been filled were removed and replaced with a gravity wall, which helps maintain the structural integrity of the historic buildings by holding back earth from the foundation. Eliminating the sidewalk vaults also providing additional space for streetscape planters and decorative items.

Additional improvements made throughout the project include:

What to Expect During Winter

On Friday, December 21, construction crews will break for the winter. During this period, on-street parking in the project area will be reinstated and temporary asphalt surfaces will be laid where sidewalks have not yet been poured. The City will maintain the sidewalks throughout the winter, including snow sweeping and salting for ice.

Construction is expected to re-start in Spring 2019, with the completion of sidewalk and curb work on the east side of State Street and the section of 9th Street between State Street and Commerce Street. The final stage in the project is the streetscape and beautification, which is designed to provide a sense of community and pride in the downtown district.

Features of the streetscape include:

More information about the project, including timeline and construction updates, can be found on Lockport's websitehttp://www.cityoflockport.net/644/Downtown-Construction