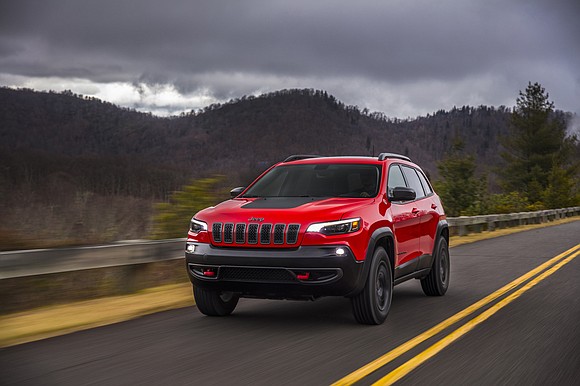 We were into twists and tight turns almost as soon as we left the hotel, drove about a half mile and took a left onto Lakeview Canyon Road. Then it was a right onto Agoura Road and then a left onto Westlake Road. It was all up from there.

The new Cherokee handled well. Canyons were scenic but when you’re pushing through them, driving a little faster than tourist speed, you find it a stop and go affair, sort of. Speeding up and slowing down for curves, turns and other traffic. But the new Cherokee went where I steered it easily. In other words, it was very responsive to driver input.

These roads can be wearing on the brakes, difficult on steering and a bit tiring because of the concentration required. The two lane twisty affairs like Mulholland Highway, Topanga Canyon Road and Kanan Dume Road and others through these canyons can get up to several thousand feet in elevation. After all, they used to be mountain trails for livestock like mules. The Jeep Cherokee had no problem navigating them.

We had an Overland 4X4 with the 3.2-liter V6, dual pane sunroof, 19.5-inch wheels and the technology option package. As tested, it had a sticker of $41,260.The engine worked a little to get up and over some of the hills. The nine-speed transmission accounted itself well but I think it could have selected a lower gear for more torque more often. However, I could have put it in manual mode and done that myself.

Speaking of modes, the 2019 Jeep Cherokee had five drive modes. Using what the automaker has branded the Jeep Selec-Terrain traction control system they were auto, snow, sports, sand/mud and rock.

I declined to retract the screen on the panoramic roof and let the sun in because I didn’t want to take the chance that glare would distract me from the task of driving, not on elevated narrow two lane roads like these. However, we did switch on the radio and found the sound rich.

Jeep did a really nice job on the interior. They used piano black and satin chrome trim to give the interior an understated premium quality.

The infotainment touch screen was wide and seemed isolated. Jeep has put many controls on the touchscreen itself, thus the template was free of a lot of buttons. Climate controls were in an oval frame under the screen and there were USB and auxiliary jacks at the base of the center console.

They left a lot of space between the odometer and the speedometer. That made the TFT screen look as though it was free floating and not wedged between the two. It was an airy look that was spread through the entire passenger cabin.