Joliet woman brings her comedy to kids at Bi-Park Theatre 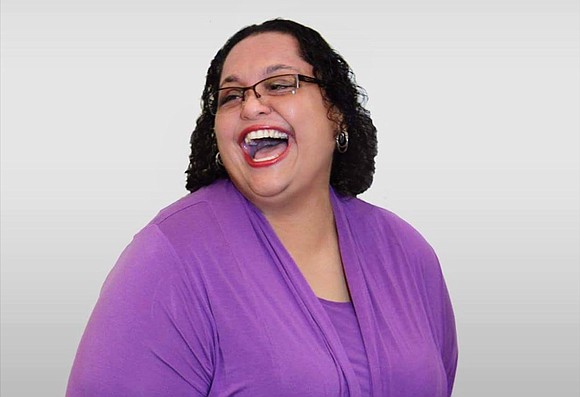 Joliet’s Kimberly Garrett, an alum of Second City, has been using her talents to teach a youth improv courses at Bicentennial Park Theater. Submitted photo

Joliet’s Kimberly Garrett knows a thing or two about making your mark in the world of theatre. So, when she left the writing program at Second City, she ditched the type of jokes she was uncomfortable with telling and found new life in conjuring the smart laugh.

“When I was traveling around doing my stand-up, when people hear a female comedian, they immediately think you’re not going to be as funny, and then when they hear you’re a Christian comedian, they really don’t think you’re going to be as funny,” Garrett said. “The world we live in today, people are so used to profanity, people don’t even think twice when they hear it.”

When Garrett first started getting into the stand-up circuit, she would commonly perform first or second.

People would often approach her after the shows to tell her how funny she is.

Typically, stand-up shows put their top acts toward the end of the program.

Garrett said at first, she didn’t understand why she was asked to perform so frequently at the front half of the show, but she didn’t let it get to her.

“Once people figured out I was really, really funny, I started going last or second to last,” she said.

The arts have long been a passion for Garrett.

“I’ve always had a passion for writing ever since I could remember,” she said. “I’ve always used writing as a creative outlet. I always wrote poems and short stories for my own benefit. I remember that I would never show them to anyone. I would just have books and journals full of things that I wrote because I felt good writing.”

Garrett wanted to expand her writing skills and started looking into taking a creative writing course at Joliet Junior College. She did some research on the Internet and in her search, she found the Second City website.

“I was very familiar with Second City being a ‘Saturday Night Live’ fan, and I found out that there is way more to Second City than I realized,” Garrett said. “They actually have a writing program. I looked into it and read everything the website had to offer about the writing program.”

Over the course of her time with Second City, she grew into a performer.

Garrett said she did not enter the program in 2011 with the goal of being a stage talent.

I had no idea that I could perform,” Garrett said. “I always wanted to be behind the camera. I thought I could say something funny and let somebody else say it. Luckily, I discovered that I had the ability to perform, then I got into improv, and it just continued to grow and blossom from there.”

When the writing program ended in 2014, Garrett went on to work at a theatre in Chicago. When the commute became too much to bare, she started performing at a theatre closer to home.

“I ended up leaving there because the comedy was so far beyond my comfort zone that I left, and wondered, ‘What am I going to do because this is what I do?” “I am a theatre person.’”

That’s when Garrett said she took a leap of faith and began to embrace “Smart Comedy”. Since then, Garrett found a new avenue thru Billie Limacher Bicentennial Park & Theatre (Bi-Park) to fulfill her dreams of working in the world of theatre.

“Bicentennial Park was interested in starting an improv class for youth” Garrett said so “They brought me in.” Up until that point, she was only focused on doing stand-up comedy and traveling.

After a short time working with her young, students introducing them to Improv games and other beginner theatre workshops, Bicentennial Park offered her a job in 2016 as a teacher and mentor.

Garrett said she’s committed to mentoring the next generation of actors, actresses and playwrights.

“You find out working with these kids at the theatre they have so many different personalities and so many different things that they deal with at home,” she said. “For a lot of these kids, theatre is an escape for them. Not everybody’s home life is pleasant. When they come to the theater, that’s their relief, or that’s where they get to finally take their breath, or let their hair down. It’s challenging, very much challenging, but it’s also very rewarding.”

A schedule was created for programs, and Bicentennial Park created a house team thereafter.

“We actually performed shows at the park, and we travel,” Garrett said of the house team. “When people call us to come out, we perform for them.”

Garrett, during her time at Second City wrote a play called “Locked In”; she brought it to life on the Bicentennial Park stage in early 2017.

Since that time, Garrett has added screenwriter to her list of accomplishments.

“I joined the team of ROAD 2 ETERNITY,” she said. “They’re a Christian film company, and they found me at Bicentennial Park Theatre. That’s why I’m like, ‘It’s so important to get yourself out there.’ They came to me, they saw my show, they saw me, and I joined their team. I signed a contract with them. It is a multi-film and multi-television contract. So, its five movies and three television shows, and I’m just ecstatic.”

Garrett said nationwide movie distributors have been calling the group, and things are really picking up.

Garrett encourages anyone who is interested in pursing a career in theatre or film to follow their passion.

“Whatever your passion is, that you’re naturally drawn to, go with that and evolve that,” she said.

Garrett has some faith-based stage productions that will be performed to Bi-Park in the coming months.

“Your Table is Ready”