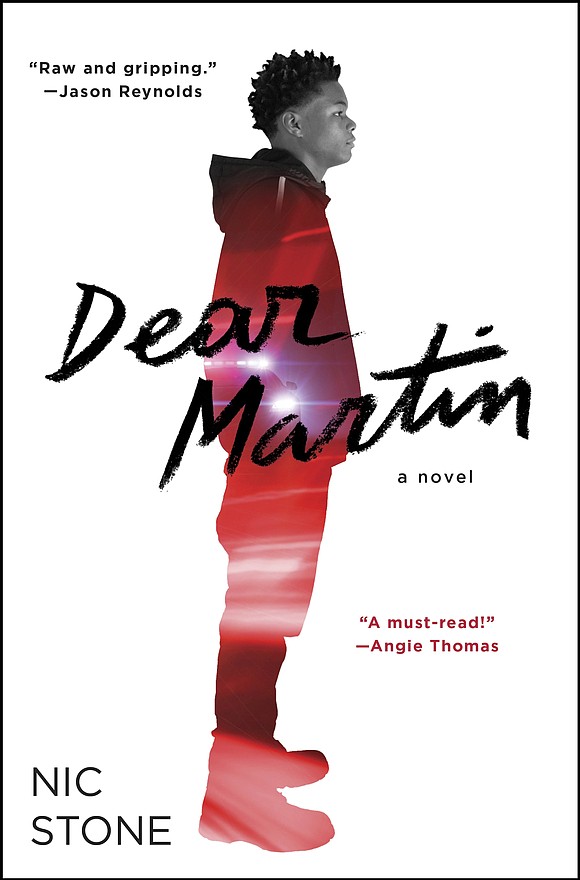 What if your entire future was mapped out for you?

All you’d have to do is show up, keep your nose clean and your mouth shut. But what if you couldn’t? What if the color of your skin had some bearing on it, and your outrage and need for understanding made you speak up? As in the new novel, “Dear Martin” by Nic Stone,WWMLKD?

It was supposed to have been a nice thing.

When Justyce McAllister saw his ex-girlfriend, Melo, next to her car, drunk and half-dressed, he knew there was no way she could drive herself home and he wasn’t about to leave her in that neighborhood. She hollered when he took her keys. She smacked him as he poured her into the passenger’s seat, which was nothing compared to what happened when the cops stopped and cuffed him, thinking that he was hurting Mel, whose skin was more light than Black.

He’d never forget the feel of those cuffs, which led him to a search for understanding through the words of Martin Luther King, Jr. Justyce felt that if he could live like Martin, he might be able to tolerate things like being guilty until proven innocent because of his race.

He might also be able to withstand guys like Jared, who was in Justyce’s debate class. From his head to his toes, Jared was racist, hiding behind fake equality in his pathetic arguments and complaints about reverse discrimination.

No, Manny couldn’t. Manny was Justyce’s best friend but he was Jared’s friend, too, which was something Justyce couldn’t understand. He didn’t get why Manny agreed with Jared’s comments or why he hung out with Jared’s crowd. Manny was Black. He had a cousin who was gang-banging but he stayed friends with a fool.

No matter. Justyce had his own issues and he wondered what Martin would do. Surely, Dr. King wouldn’t stay quiet about racial profiling. Would Martin fall for a white girl? And this: Martin chose to be nonviolent, but what about everybody else?

What can you say about a book that surprises, gives you goosebumps, makes you happy, and then makes you sad? If it’s “Dear Martin,” you say, “Yes, please.”

Through an observant narrator and the spot-on voice of a teenage boy, author Nic Stone takes national news and gently twists it into a believable tale that’s smooth and somewhat unruffled until – bam! – Stone drops a gigantic stone into the story. If you haven’t fallen for her perfectly-created characters by that point, she’ll have your compete attention there. What happens next, and next after that, is unexpected – don’t even try to guess – and it’ll have you turning pages. Indeed, you’ll absolutely need to know how this tale ends and how a man who’s been dead nearly five decades impacted it.

This may be one of the most truthful, chilling novels your teenager may read this winter, but you need to find it anyway. “Dear Martin” is a winner, and what if you miss it…?