Bolingbrook mayor gets emotional during State of the Village 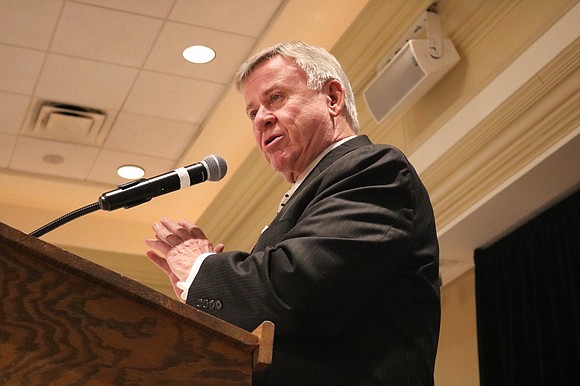 Claar was joined by a number of state and local municipal officials, business professionals and others, seeking to learn of what’s changed in the Village since 1986 and what’s to come.

“I feel compelled to acknowledge people of notoriety in town because of what their service was to the community or participation in the community,” Claar said.

Claar took a moment to recite a list of names and went on to fight back some emotion speaking of one public servant, Leroy Brown, Sr., who died Oct. 31, 2017.

Brown was a long-time Bolingbrook resident and served as deputy to the mayor for 17 years. A photo slideshow ran across a screen projecting images of Mr. Brown to commemorate the life he led.

“Leroy Brown is, by far, the most popular man in Bolingbrook,” he said. “With us today is his widow, Pat Brown. ... He was always there.”

Claar thanked Brown and continued to deliver his 32nd State of the Village address, in which he highlighted the Village’s accomplishments made since 1986 and touted Bolingbrook as a “hub of events for people to gather and do good things for other people.”

Claar went on to make mention of a number of local organizations working to engage the public and promote a sense of community.

Another accomplishment noted during the State of the Village presentation included economic development.

Claar acknowledged the spread of concerns locally and nationally for retail developments in an increasingly e-commerce-driven world and said The Promenade Bolingbrook continues to thrive.

“The mall is 94 percent leased, which is 3 percent higher than the national average,” he said.

New developments have continued to come on line in town, with the recent openings of ATI Physical Therapy, Tailgaters Sports Bar & Grill and Residence Inn by Marriott Chicago Bolingbrook.

In 2018, there will be a number of new businesses to open up in town, including Beggars Pizza, Slim Chickens and Andy’s Frozen Custard.

“We have two large projects we hope to announce in about 45 days that are coming here,” Claar said. “I can’t announce them yet.”

The Village prides itself on its effort to work on tourism.

“We have over 950 hotel rooms in Bolingbrook now, and there are many nights you can’t find a room in this town.” “They’re all filled.”

The Village of Bolingbrook is working to bring in more tourists over the weekends to partake in different activities and check out the various attractions.

“The Holiday Inn was just totally revamped this year,” Claar said. “They doubled their lounge.”

The current state of federal, state and local government

At a time when public servants are often scrutinized for what they do and what they don’t do, Claar took time to offer his thoughts on the current state of federal, state and local government.