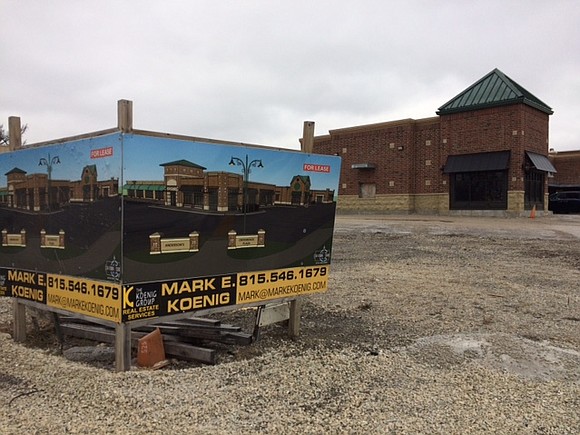 A new Chicken-N-Spice restaurant will open in Anderson's Crossing at the corner of Routes 52 and 59 in Shorewood in May. Photo by Brock A. Stein

The landmark Joliet restaurant Chicken-N-Spice is branching out with plans to open a new location in Shorewood.

The new owners of the Shorewood location are hoping to be open by May 1 said Pat Reimer, owner and manager of the downtown restaurant. The new restaurant will be located in the lot known as “Anderson’s Corner” which sits at the intersection of Routes 52 and 59.

Reimer said that the owners of the Shorewood location will be offering most of the menu staples that customers find at the downtown location now.

“They’ll be serving the chicken chunks of course,” said Reimer. She said that they also plan to offer gumbo as well though not on Thursdays which is the downtown location’s day to serve the favorite. Reimer said that new location will offer a drive through as well as catering in addition to serving workers on their lunch breaks in the area. Reimer said that many long-time customers from the suburbs are anticipating being able to get their Chicken-n-Spice menu favorites closer to home.

“They’re very excited about having something in their own backyard,” she said.

“I think it’s going to be a win for everybody.”

The Joliet Chicken-n-Spice first opened in downtown Joliet in 1979 and has become famous for its fried chicken breast chunks, spicy rice, potato wedges (known as Jo-Joes) and buttermilk biscuits.

The flagship store at 251 N. Chicago St. will continue to operate at its current location as well according to Reimer and will serve as a training ground for the staff of the new Shorewood store. The Joliet property is in the process of being purchased by Joliet Junior College which originally intended to honor the lease until 2022 but Reimer said with no current plans for the site that it’s been extended to 2027. College officials have indicated that they plan use the site for parking expansion and a future pedestrian mall for the JJC downtown campus.

By that time, Will County residents could see even more Chicken-n-Spice locations as Reimer indicates that the new Shorewood owners have plans to expand and open up to 10 restaurants over the coming years.

The Shorewood location was previously the home of the former Baba’s restaurant which closed in 2011 and was torn down soon after. Before that it was the site of the Anderson Family Restaurant, which opened in 1936 and later became a service station. The corner has been known to longtime residents as “Anderson’s Corner” and is still owned by the family of long-time village trustee Dan Anderson.

The site and the two strip malls there were refurbished in recent years, and a home at the site was also demolished before it was renamed Anderson’s Crossroads Plaza.