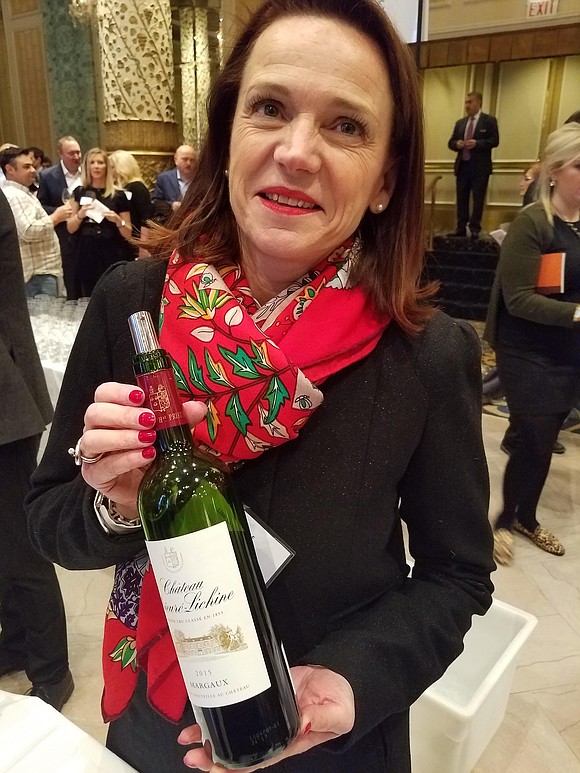 The Union Des Grand Crus De Bordeaux presented a spectacular collection of wines from this French capital of wine-making during a national tour that included Chicago, New York, Denver and San Francisco. Photo by Dwight Casimere

The Union Des Grand Crus De Bordeaux presented a spectacular collection of wines from this French capital of winemaking during a national tour that included Chicago, New York, Denver and San Francisco. Representatives from

wines, all of which represent their expertise and passion as winemakers.

The 2015 vintage Bordeaux wines are exceptional for their vibrancy and

complexity. All of the famous appellations were represented:

The magnificent Grand Ballroom of the historic Drake Hotel on Chicago's

Gold Coast, with its magnificent lakeside views, was the setting for the

Among the outstanding wines was this week's wine of the

and owner Lise Latrille. At just under $50, this wine is priced in the

comfortable mid-range of this year's Bordeaux selection and is an outstanding value, with deep character and excellent craftsmanship.

The winery itself has an illustrious history. Founded by monks in the 12th

century, the vineyards were known for producing great wines from the very

beginning. After the French Revolution, the winery passed into civilian

winery and added his name. For nearly half a century, the Lechine family

vilification. Now owned by the Baqllande group, the chateau has entered a

The winemaking team is devoted to expressing the full diversity of

the winery's varied terroir. This wine is an excellent representative of

that diversity. It is a virtual taste of the Margaux in a glass.