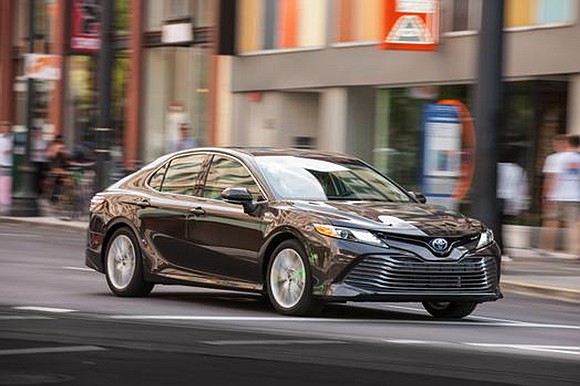 Toyota is the industry leader in many areas; one of them is in the sale of hybrids. And as the automaker continues to produce hybrids they get incrementally better. I had the new Toyota Camry Hybrid for a week last winter and found it surprisingly capable.

Unforeseen by me was the oomph that this car made. Hybrids are notoriously slow. But the 2018 Camry Hybrid had a little bit of kick when I stepped on the accelerator.

Toyota still uses a Nickel-Metal Hydride battery in the Camry Hybrid which made a combined 208 horsepower. It was mated to a continuously variable transmission. The few times I got the chance to get down on the accelerator, the Camry Hybrid responded with authority. I’m not saying it burned rubber but it could move relatively quickly when needed.

It snowed during my test drive and then it snowed some more. But that didn’t pose a problem for the Camry Hybrid. It was a front-wheel-drive midsize sedan. There was not much of a chance to check out the suspension, it was an independent MacPherson strut in the front and a double wishbone setup in the rear. Side streets were slush filled and the main roads were snow packed, read slippery. However, the mileage was outstanding: the EPA rating for the 2018 Toyota Camry Hybrid was 53 mpg in the city and 51 mpg on the highway.

I had the XLE trim line. That meant 19-inch wheels, adaptive LED headlights with level control and LED daytime running lights. There were LED taillights as well. There was a bright metallic grille, color-keyed heated power sideview mirrors with blind-spot warning indicators, a moonroof and the car had an acoustic noise reducing windshield.

Inside seemed like another world. Being partially electric, the 2018 Toyota Camry electric motor started first. Sometime the sedan had to be put in drive before the gasoline engine kicked on, sometimes if you let it idle for a few seconds the engine would kick in. In other words, the car was super quiet.

There were plenty of creature comforts beginning with heated front seats and dual climate controls. This Camry had wireless charging for a compatible smartphone. It had a seven-inch TFT screen, a backup camera with cross traffic alert, and an overhead camera, smart key for the front doors, push button start and remote illuminated entry.

What’s become the usual equipment was satellite radio, voice controls, a navigation system, touchscreen, Bluetooth, USB plugs, 12V plug and a premium audio system that included a CD player, MP3 playback and a HD radio. There were leather trimmed seats with a quilted pattern, 60-40 split seats in the back that folded and rear adjustable headrests.

The 2018 Toyota Camry was a nicely appointed sedan. And with all the goodies, it was somewhat surprising that at $37,250 as tested, it cost less than $40K.