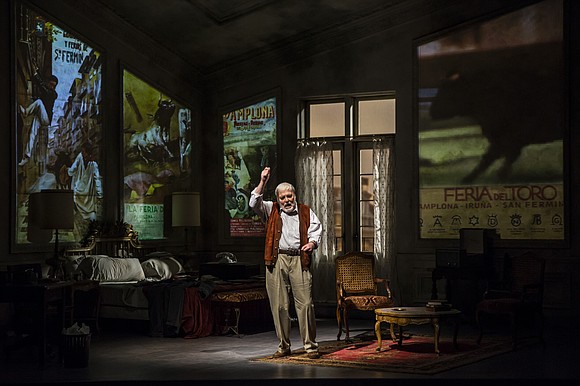 The esteemed television, stage and film giant Stacy Keach's onstage transformation into that giant of the literary world, Ernest Hemingway, in Goodman Theatre's World Premiere production of Jim McGrath's play Pamplona, directed by Goodman Artistic Director Robert Falls, is a miracle to behold. Originally scheduled for last spring's season, Keach had to bow out following 11 preview performances after suffering an onstage seizure on opening night. Those who attended this season's opening were richly rewarded for their wait, for Keach delivered a performance of monumental proportion.

The play takes place with Keach pacing the confines of a rundown hotel room in Pamploina Spain like a caged animal, in a set crafted with creative genius by Set Designer Kevin Depinet. Faced with a looming deadline to write a magazine article on a duel between two famous bullfighters, Hemingway is facing the twin demons of writer's block and deep personal depression. Just a few years on the heels of winning the Nobel Prize for Literature, the famous writer finds himself at a dead end. Fighting desperately to get past the opening line of his article, writing and re-writing the words until they almost become a mantra to failure. The bullfight becomes a metaphor to Hemingway's deepening dilemma.

Keach is in top form, conveying the writer's inner turmoil with subtle changes in his rich, booming voice and gestures that alternately convey explosive emotional fury and surrendering weakness. His character, for example, plays a continual game of cat and mouse with the front desk, begging to have a bottle of whiskey sent up after telling the clerk to ignore the request at all costs. Projection design by Adam Fleming masterfully weaves in a backdrop of projected images that punctuate the writer's narrative with images of his parents, influences such as Gertrude Stein and episodes of the war that molded his legendary pesona and shaped his psyche. The Original Music and Soundscape by Michael Roth also further advances the emotional progression of the play to its climax.

Pamplona is a masterpiece of modern stagecraft. This is an opportunity to see a multi-media legend at the pinnacle of performance in a vehicle that seemed to have been written just for him. Go see it. For information, visit GoodmanTheatre.org.