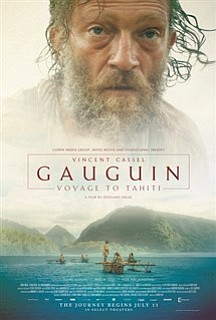 Edouard Deluc's exquisite film Gauguin: Journey to Tahiti is in limited engagement beginning Friday July 20 at The Gene Siskel Film Center in Chicago's Loop. A fictionalized account of the tortured genius's phenomenal life, the film recounts his eschewing of the life of 1890s Bourgeois Paris and its contrasting Bohemian culture.

Abandoning his wife and five children in Paris, he ventures to Tahiti. Vincent Cassel, with his deep set eyes and craggy face of lines dug in like the wood block etchings Gauguin created to depict his magical new world, gives life and breath to the artist's angst and brief moments of exquisite joy .

Deluc's deft directing and sweeping panoramic lens captures the all -encompassing glory of this strange new world of Tahiti and its mystical mountains, hills, and valleys. Tuhei Adam's is luminous as the artist's common law wife Tehura.

As quickly as Gauguin discovers his paradise found it becomes paradise lost in a devolution of jealousy, poverty and Ill health. The demons that at once drove him to the brink of destruction simultaneously fueled his painterly genius. It is an arresting paradox that is captured with excruciating clarity in Deluc's captivating film.

Despite being in French and Tahitian with English subtitles, the emotions in the film are conveyed so eloquently in both the scenic visuals and in the actor's expressions and gestures, the viewer quickly becomes immersed in Gauguin's troubled psyche and glorious milieu.

Gauguin: Journey to Tahiti is at once a recounting of one man's heroic journey of self-discovery and an artist's rendering of our own inner longings and desires.