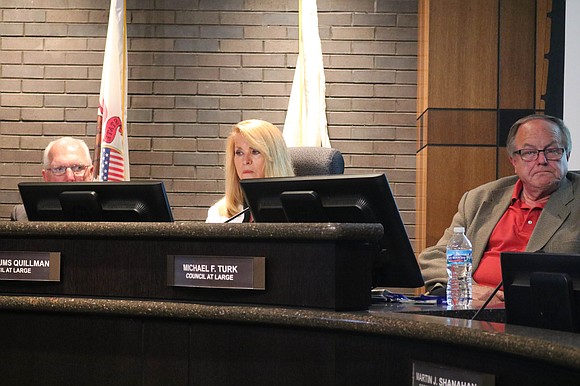 The City of Joliet is weighing its options for the redevelopment of Riverwalk Homes, formerly known as Evergreen Terrace, and officials say part of their promise to demolish the apartment complex, build anew and relocate some units across Joliet is not viable.

At Monday’s meeting of the Joliet representatives for Holsten Development Corporation gave their pitch on what is proposed for the site.

Joliet purchased Evergreen Terrace for an estimated $15 million three years ago through eminent domain, a legal process in which the property was acquired in exchange for access to Community Development Block Grants. Around that time, officials spoke of plans to demolish the 356-unit development, build anew and relocate some units across Joliet.

Andrea Keeney, senior development manager for Holsten Development Corporation, spoke of a meeting held about two weeks ago in which Joliet officials reviewed and provided feedback on a series of redevelopment options.

“Some of these scenarios you’ve seen before, but there are some modifications,” she said. “There are some new scenarios, as well.”

The options included everything from a demolition of two of the seven buildings and aesthetic improvements to the remaining 319 units, to the complete demolishing of the apartment complex in exchange for townhome style units.

Keeney explained that because the Housing Authority of Joliet cannot extend capital budget funds to assist with redevelopment plans certain concepts are more realistic than others.

One concept was likened to that of Water’s Edge, a Housing Authority of Joliet project that is located on the city’s east side.

Keeney said that “a project of this type couldn’t be done, unless the city is willing to walk away from repayment of $11.4 million” in local funds paid to acquire Evergreen Terrace.

Councilman Larry Hug wanted it to be clear that Joliet wants to be made whole by the property acquisition costs expended in the estimated $15 million, including the $3.5 million set aside in Community Development Block Grants, for the apartment complex.

“HUD would want to track that {funding,}” he said, noting those grant dollars must be used for their intended purpose. “As a city, we use that money by reassigning” them throughout the city.

The city this September is required to submit a redevelopment plan for Riverwalk Homes to the Department of Housing and Urban Development. Prior to then, Joliet will host several meetings for residents and the broader community to attend, as well as meet with the architects to ensure all the projected numbers are accurate.

City Manager David Hales recommended that the council narrow down its list of options for the public to review.

When an idea was raised to eliminate a scenario drawing comparisons to Water’s Edge, Councilwoman Jan Quillman commented that she and members of the public have been under the impression for years that all buildings would be demolished, much like how the Housing Authority of Joliet project was done.

“We need to present that one,” she said.

Quillman said it’s a question that’s been asked of officials over and over again that they need to at least present the scenario to the public and let them see why it’s not financially possible, even though it was promised when the city won the lawsuit to take ownership of Evergreen Terrace.

Officials will present one scenario for the city to advance as a recommendation to the Department of Housing and Urban Development at one of the council’s August meetings.

Several at the meeting questioned why officials were looking to take action so quickly, and some attendees shared their discontent for the city’s handling of the matter.

Corporation Counsel Marty Shanahan contended that Joliet’s deadline is September and that he will find out if they can request an extension.