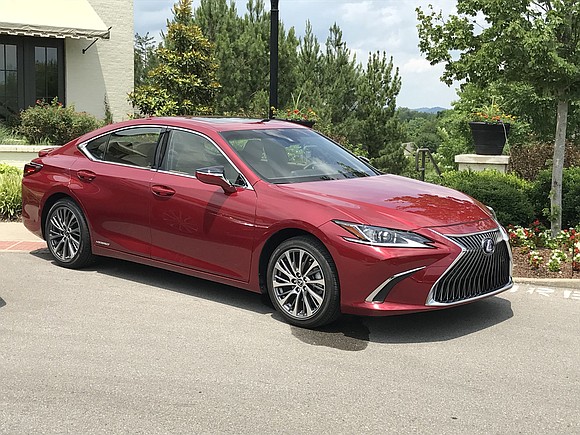 Lexus, like a lot of other manufacturers, got caught. One of the world’s premier luxury brands, it is in the middle of rolling out a new generation of sedans when the entire market has become utility driven, pun intended. Last year light truck sales accounted for two thirds of market sales.

Still, Lexus can’t stop its product cycle. In other words, it must launch the vehicles that are in the pipeline and it is time to launch the 2019 Lexus ES 350. With about 50,000 sales last year, the ES is the top seller in the entry luxury market.

Lexus thinks it can retain its current customers and attract some new ones. In other words, Lexus aims to gain share in the segment even though it is shrinking, at least for the next few years.

The seventh generation Lexus ES was longer, lower and wider. The car also had a wider track. We got the chance to drive all three versions: the ES 350, the ES 300h hybrid and the new nameplate ES 350 F Sport.

We started with the ES 300h. It had a new fourth-generation Hybrid Drive System coupled with an Atkinson cycle 2.5-liter, four-cylinder gasoline engine with a lighter, more compact, more power dense electric motor and self-charging hybrid system. Together they delivered 215 total system horsepower and a preliminary estimate of 44 mpg in combined driving.

Lexus said the new engine incorporated fast-burn combustion technology that makes it one of the most thermally efficient engines that the brand has ever offered. The result is more power without increasing emissions or fuel consumption.

They said the ES 300h had been improved thanks to a more sophisticated hybrid system control computer that is better able to mimic the feel and power delivery of a standard gasoline engine. Lexus came close. At street speeds I found it almost impossible to tell the ES 300h was a hybrid. It wasn’t until I had to get down on the accelerator did I hear the drone of the CVT. Still the car got up to 80 mph smartly.

An all-new nickel metal hydride battery was smaller than before which allowed it to be mounted underneath the back seat so it didn’t infringe on trunk space. I didn’t look but I took their word for it.

However, I did ride in the back seat of the ES 300h and found it to be spacious. There was plenty of hip and head room. And since the wheelbase was increased two inches, there was plenty of leg room too. The interior dimensions were the same for the other two trim lines.

The hood had been lowered and that gave the 2019 Lexus ES a sleeker look and downward slant. There were two grilles. The 350 and 300h (hybrid) grilles used vertical bars that radiated out from the center which I thought looked great,

The ES 350 F Sport grille had a blacked out pattern comprised of interlocking L shapes that I couldn’t discern as being an L but it did look good. There was corresponding cut outs at each corner of the rear fascia. This is the trim line that Lexus hopes will attract younger buyers.