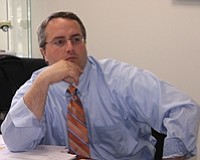 State Rep. John Connor, Lockport, is sponsoring a measure that would block an automatic pay increase for Springfield lawmakers.

Connor's House Bill 5760 is sponsored by a bipartisan group of legislators and would prohibit a cost of living increase in the upcoming fiscal year, blocking a pay

increase for lawmakers and freezing pay at current levels. Similar measures have

to the people that I represent," continued Connor. "I do not believe that lawmakers

should expect an increase in pay, especially when our state is in such poor

financial health. I urge my colleagues from around the state to stand with me in

fiscal responsibility, and support a pay freeze for legislators."