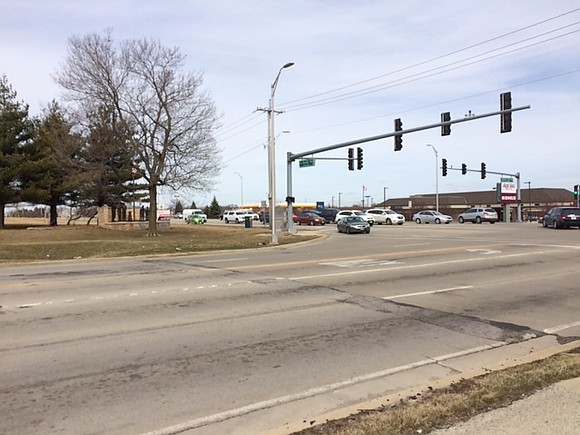 The City of Joliet has approved a sales tax rebate agreement and re-zoned land at the corner of Route 59 and Caton Farm Rd. in Joliet that will become the new home to Hawk Motors. Photo by Brock A. Stein

Joliet will rebate $3.5 million in sales tax revenue to keep Hawk Motors Volkswagen and Mazda—and a possible yet to be named car model—in the city.

The city council approved a reclassification of just over 7 acres of land at the corner of Route 59 and Caton Farm Road for the dealership to relocate from its 2051 Jefferson St. location.

Hawk Motors finalized a deal in 2017 to purchase the corner from the Joliet Park District for $4.5 million. The site is part of the Wedgewood Golf Course. The dealership had considered a couple of locations near the intersection of Theodore and Route 59 as well as land on Fraser Road in Plainfield before settling on the far-west Joliet location.

The city agreed to a sales tax rebate that will refund 70% of sales tax revenue back to the dealer for the first 5 years of the deal. That rate will drop to 60% for years 6-10, and down to 50% in year 11 until the full amount is refunded.

Economic development director for the city Steve Jones said that the deal is “sort of the cost of doing business” as the city seeks to retain businesses. He noted the loss of a Toyota dealership to a nearby town last year.

“We know we lost a dealer to Romeoville recently,” said Jones referring to Thomas Toyota which announced it would move in 2016 from its Larkin Ave. location.

“You hate to do it but it’s part of the way of keeping substantial sales tax dollars and revenue in town,” he said.

Jones said that the dealership was moving due to pressure from the automotive manufacturers who felt that the Route 59 location “opens up the Plainfield/Naprville market.”

Jones said that a 3-acre piece of the 7 acre plot could be occupied by a third auto dealership for a brand that is not currently sold in the city.

“It would be another dealership that does not presently exist in Joliet,” said Jones. That was confirmed by attorney Mike Hansen who said that Hawk Motors owner John Crane was currently working on a deal to bring the new car model dealer to town.

Hansen also asked to modify the deal with the city to extend the tax rebate to the potential new dealership.

Also included in the agreement for the $11 million development, the city approved a $10,000 cap for building fees and waived a requirement to install sidewalks along Caton Farm Road. Sidewalks will be installed on the Route 59 side of the new location.

A traffic study submitted by the developer shows a need for a traffic light at the intersection of Caton Farm Rd. and Olde Mill Rd but was rejected by the city’s traffic engineer.

Resident Scott Ward who lives in the Wedgewood Subdivision west of the intersection said that an added traffic signal along with increased traffic from a full-service entrance on Caton Farm will make the already busy stretch of road even more so.

“The traffic in that area I believe is the 2nd or 3rd most dangerous in the city,” said Ward, ““It’s going to get worse with more traffic.”

Ward said that he hopes the city will insist on adding turn lanes near the intersection as well as traffic control devices to prevent left turns in to a BP gas station across from the proposed dealership to the south.

“The turn lanes going in and out of the dealership would be a huge addition for public safety,” said Ward.

Council member Larry Hug asked if the city could block left turns in to the BP station due to agreements made at the time the site was developed. Hug asked the city attorney to look at whether the deal included a sunset clause.

“We have to revisit turning left,” said Hug, “It’s become more dangerous over the years as we’ve gotten more development out in that area.”