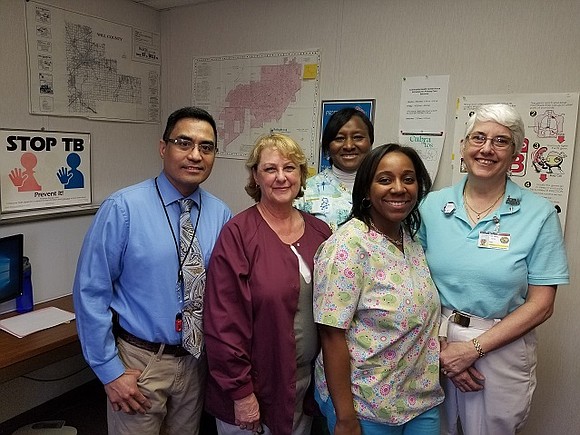 With Saturday the 24th of March being “World TB Day,” the staff at the Sunny Hill Tuberculosis Clinic of Will County is helping fight the daily battle against tuberculosis (TB). This includes the kind of tuberculosis that is dormant inside your body, but not causing any symptoms or harm; at least, not yet.

This is called “latent tuberculosis,” which the clinic’s Medical Director Dr. Dan Garganera says is one of the major challenges in the world today when it comes to battling TB. If the TB is “latent,” it means you have been exposed to the bacteria, and it is currently in your body, but not causing any manifestations of active TB. This also means you are not contagious at this point.

Latent TB is perhaps best described as an M&M candy with the hard shell around it. The chocolate is the TB bacteria, and the shell is keeping it latent. But Sunny Hill TB Clinic Administrator Joyce Reliford-Parker says there are various factors that can take that “protective shell” away, and cause the bacteria to wake up and become Active TB.

“It can be awakened by advanced age, or numerous diseases such as diabetes, HIV/AIDS, cancer, or even sometimes smoking or exposure to pollution,” Reliford-Parker explained. “In rare cases, even pregnancy can sometimes wake up the germ. And more and more today, new medications taken for common ailments can awaken TB as well.”

And once it becomes active, there are a variety of symptoms, mostly affecting the lungs. These can include coughing that lasts up to three or more weeks, coughing up blood, chest pain, difficulty with breathing, weight loss, fatigue, fever, night sweats, chills, and loss of appetite.

When a TB skin test (PPD) shows that a person has the bacteria, the next step is to find out if they actually are active and contagious. A blood test (such as a T-spot or TB-Quantification Gold test), is done along with a chest X-ray. If both are positive, sputum specimens are collected to determine active infection.

As for how someone becomes infected with TB in the first place, Dr. Garganera says it must be remembered how extremely contagious Active TB, an airborne disease, actually is. “It’s really the flu on steroids, “Dr. Garganera explained. “While the flu is spread by the inhaling of droplets, often to someone up to about two meters from you; TB droplets actually become part of the air and can infect someone, say up to 20 yards away. Not only that, but the bacteria can remain in the air for a couple of hours.”

The CDC has classified many high-risk groups for TB. Dr. Garganera says that ironically, there is a certain demographic that is highly affected in the U.S. and worldwide: health care workers. “Sometimes a health care worker may inhale the bacteria from someone they are treating, but that patient may have undiagnosed active TB. The bacteria may then be suppressed by the health care worker’s immune system, becoming Latent TB. This is why it is important that health care workers be screened for tuberculosis.”