Goodman: “Until The Flood” lays bare the soul of Ferguson and the nation - now 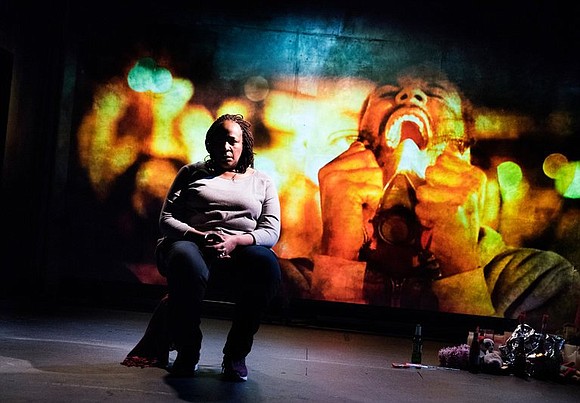 Dale Orlandersmmith's Until The Flood, playing in the intimate Owen Theatre at Goodman Theatre now though May 12 is exactly what the Greeks had in mind when they invented theatre. Unknown

Dale Orlandersmmith's Until The Flood, playing in the intimate Owen Theatre

when they invented theatre. It brings together strong words and nuanced

characterization that are both symbols unto themselves and representative

of a larger truth. The play uses the words of actual Ferguson residents

a young, white police officer, Darren Wilson, on the night of August 9,

around the world, sparking international protests, and a wave of rising

black communities around the country. The most recent manifestation is this

Until The Flood was originally commissioned by the Repertory Theatre of St.

the tragedy. Since then, the play has played to rave reviews Off-Broadway.

After its limited Goodman engagement, it continues its journey to Seattle's

Playing eight composite characters based on her extensive research into the

moods of actual residents in the years following the Ferguson shooting,

Orlandersmith inhabits each of the personages with an uncanny and often

unnerving accuracy. Watch as she dawns a shawl (one of the lone props in

segregationist Ferguson in the 1950s.

We then hear from Rusty, a retired white Ferguson career policeman who

defends the right of police to use force when there's the slightest doubt,

to Hassan, a 17 year old street kid who dares the white establishment to

point a gun at him and fire. Next, there's Connie, a well-intentioned young

white teacher at an all-black school who finds solace in a glass of Chardonnay in the areas wine bar.

Then comes Dougray, a young white self-made man who is perhaps a

symbol of those upwardly mobile young whites who are gentrifying black

neighborhoods around the country.

Orlandersmith uses words like a sculpture etching indelible images into a

piece of stone. She moves seamlessly from character to character, not

giving audience so much as a psychological breath. The cumulative effect is a

psychological tsunami that leaves one emotionally drenched, yet wanting

more. We're drawn to Orlandersmith's characters like moths to a flame, only

the flame is the smoldering embers of a racial Armageddon, both ignited and

sanctified by the blood of Michael Brown. Until The Flood is a haunting

the Owen stage. This play is well worth the ticket.