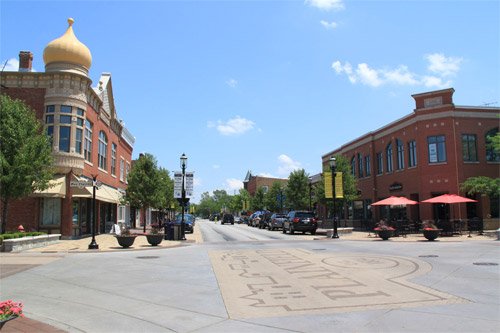 Proposed changes for downtown Plainfield include more bike racks and an improved pedestrian crosswalk at Lockport Street and Route 59. www.nps.gov

Plainfield’s efforts to maintain a downtown that attracts residents and other community members appears to be working as the Village has dozens of businesses in the area for shopping, dining and entertainment.

The streetscape and road construction, completed in 2009, shows the Village’s desire to retain and attract businesses, as well as spur activity in economic development and reinvestment. It features raised intersections, mid-block pedestrian crossings and wide sidewalks.

Commonly, the establishments in downtown Plainfield are ran by small business owners.

consignment shop is going strong once they opened in their Plainfield location, 2013.

“After we were here two-and-a-half years, we expanded,” she said, noting that her business had previously moved from Orland Park. “We have a lot more merchandise, and the customers, they love roaming around.”

Plesha said it’s been good having a location in the downtown area that is pedestrian-friendly.

From antique to modern, the consignment shop offers an array of items for people to consider purchasing.

“We span all the decades,” Plesha said. “We carry everything.”

Inside the shop, patrons will find anything from clocks and artwork to jewelry.

The owners work to ensure that new items are rotated in constantly.

Plesha said it is not uncommon to get customers who drop in after dining at a nearby restaurant or visiting another establishment.

Plesha hopes people will take note of what separates On the Road Again from similar type establishments.

“It’s the way we stage everything,” she said. “It’s the warmth. It’s the quality and the ambience.”

Larry’s Diner has been in business for 27 years. Gus Alexopoulus and his partner, who died several years ago, started the diner.

Alexopoulus said setting up shop in Plainfield made a lot of sense.

“We live in Plainfield,” he said.

Larry’s Diner serves breakfast, lunch and dinner. The establishment comes equipped with a banquet hall that holds up to 140 people.

From grilled cheese and the porterhouse steak to Parmesan chicken, patrons have a plethora of options.

Alexopoulus said the diner is committed to ensuring that “everybody is happy” when they drop in.

“I have good reviews,” he said.

Alexopoulus credits the success of his business over the years to having “good food, service, a clean place, and good hospitality.”

Top Reviews Salon owner Lynne Villiaros, also located in the downtown area said she is happy to do business in Plainfield.

“It’s important to have a business in the community you live in. “This location, it’s nice. We’re on Route 59 and Lockport Street. We have access to parking, and that was important to me. It’s convenient for customers. I like the downtown community, and I wanted to be in an area where people could go up and down the street.”

“The name is called Top Reviews and that’s how customers respond,” she said. “They leave reviews.”