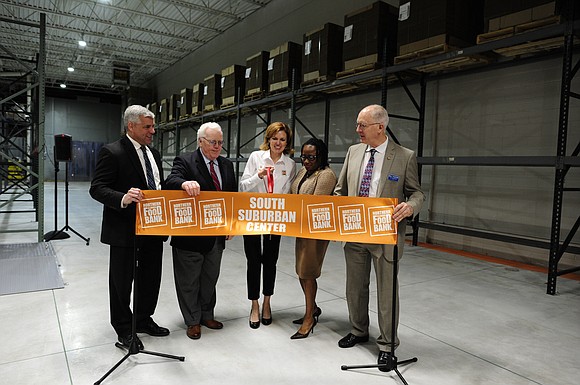 The new center will support 175 local food pantries and feeding programs that currently work with the Food Bank to either receive food deliveries or schedule pick-ups from the main headquarters located in Geneva.

“We’re thrilled to bring this much-needed resource to the communities of the south suburbs, and humbled by the support we’ve received to make this a reality,” said Yurko. “The South Suburban Center improves access to fresh foods like dairy products and vegetables and helps our partner agencies get fresh food and other staples to their clients more efficiently, especially in those areas we’ve determined to be high-need.”

The South Suburban Center occupies a former Cub Foods location, owned by Harvest Bible Chapel, and made use of existing dock access, refrigeration and freezer walls. In addition to food storage capacity and access for agencies, the warehouse has been configured to provide food sorting/packing space for volunteers, as well as offices for Food Bank staff.

With the increased food distribution and volunteer capacity at the South Suburban Center, the Food Bank will be able to provide an additional million meals annually to residents in Will, Grundy, Kendall and Kankakee counties. Right now, the Food Bank supplies more than 14 million meals to nearly 80,000 food insecure residents in those counties; with more than half being children.

“Fresh food is so essential to what we can provide our clients, and our partnership with Northern Illinois Food Bank helps us make a difference in their lives every day,” said Dawn MacGregor, Executive Director of St. John Lutheran Church Food Pantry in Joliet. “The new Center means we have increased access to food, helping more of our neighbors who are hungry.”

The Food Bank has been raising funds for the fourth distribution center since 2015 and has raised more than $855,000 to date to remodel and build out the facility.

Every year, more than half a million people across Northern Illinois visit the Food Bank's network of 800 food pantries and soup kitchens for groceries or a hot meal. Last year alone, Northern Illinois Food Bank distributed more than 65.5 million meals to people in need across its 13-county service area through programs such as its Mobile Pantry, Senior Grocery, Milk2MyPlate, After School Meals and BackPack programs.