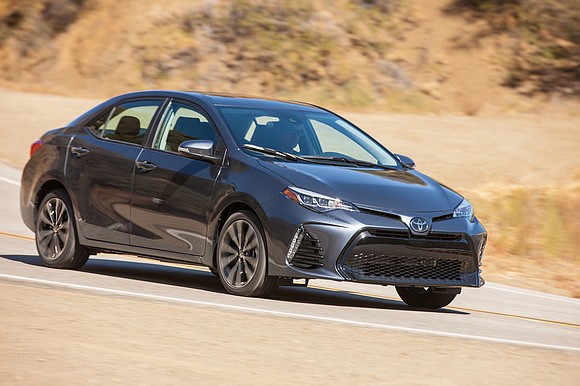 You don’t find many nameplates that survive for decades. But Toyota’s Corolla is one of them. In fact, if this car had not been successful it is doubtful that the brand would have survived in the U.S. market.

Introduced in 1966, the Corolla celebrated its 50th anniversary in this market a little while ago. More than 43 million have been sold. And the traits that made Corolla so successful in the past hold true today. It was small, fuel efficient and reliable.

It is still small, comparatively. And for 2018 it got snazzier with a new grille and LED headlamps. The wheels had been redesigned on the trim line I had, the Corolla SE and those LED lights were standard and the car had 17-inch wheels. My test car had a moonroof too.

Toyota is making a big push in the safety department and it is rolling the Safety Sense-P into all Corolla models. It bundles a pre-collision system, pedestrian detection, lane departure alert with steering assist, smart cruise control and automatic high beams.

The Corolla had a 1.8-liter four - cylinder engine that made 132 horsepower and 128 pound-feet of torque. It was mated to a continuously variable transmission, which was engineered to simulate shifting. I felt the car shift “gears” a few times but I really didn’t think it was worth the effort. Still, the CVT was not that bad. It moved the Corolla without a lot of fanfare. But it did have that unending drone during aggressive acceleration.

The car handled well, cornering was accurate and the suspension provided a firm ride without being harsh. The compact Corolla rode and handled more like a midsize sedan. It was quiet, spacious and easy to drive. I had a cloth interior and it was just fine. I gave a friend who happens to be 6’1” a ride and she said nary a word about lack of headspace or not having enough legroom.

I downloaded the navigation app onto my smartphone and had to pay eleven bucks for my trouble. I only hope it works with brands other than Toyota or Lexus.

My Corolla was equipped with more than $1,500 worth of options. The moonroof, a touchscreen display, a port of iPod connectivity, satellite radio, push start and stop and lock and unlock. Although I didn’t use it, I was impressed that it could stream music via Bluetooth.

Most impressive was that the sticker on my test car was $22,925. That’s what made a Toyota Corolla successful. It was a dependable car at a low price. The same holds true today except for one addition. The Toyota Corolla is very stylish.