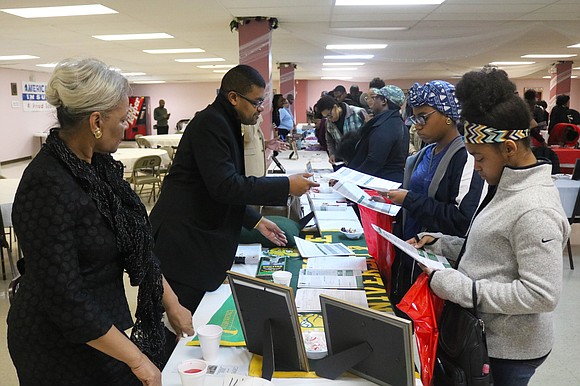 The Betty Mahone Black College Fair has grown over the years in more ways than one.

“It has been inspiring to see so many people from our community come together each year to share their success and help others,” said Betty Mahone, founder of the black college fair and a retired educator. “I cannot stress the importance of young people seeing the members of their community showing an interest and investing time in them. It is so important for our young people to be aware of the resources available to them.”

The event provided an opportunity for students to talk with representatives and alumni of more than 20 historically black colleges and universities and obtain valuable information as it regards the availability of scholarships, grants and financial aid.

“I know that most of the students who attend the black college fair will not be attending historically black colleges and universities, but I wanted them to be aware of their existence and their great heritage,” Mahone said.

About 25 years ago, Mahone’s son was trying to decide what college he wanted to attend after high school graduation only to find there was no representation from any of the historically black colleges and universities at the countywide college fair held in Joliet.

“I later talked to the head counselor at Joliet Central [High School,] Dr. Clarice Boswell, and she suggested that we do our own Joliet Area Black College Fair,” Mahone said. “Using our local black educators, doctors and business people who had graduated from historically black colleges and universities, we requested materials from their colleges and universities and had our first black college fair in the fellowship hall of Brown Chapel African Methodist Episcopal Church in 1994.”

Also at the event, a health fair provided the community with health care pamphlets and screenings for diabetes, cholesterol and blood pressure.

“The main goal is to get young people of color into two- or four-year colleges and universities,” said Jason Stewart, a graduate of Ohio State University, who spoke on behalf of Morehouse College. “A lot of teens they’re not exposed to different opportunities. The more we can expose them, the more we can help broaden their horizons.”

Stewart urged students to consider Morehouse College and what it aims to offer.

“It is a more expensive college,” he said. “More than 90 percent of students are on financial aid. We don’t want to scare anyone from attending the college, but you might have to work a job a couple hours a week. It’s possible.”

Joliet West High School senior Shayann Mack said she was motivated to drop in for the black college fair.

“I’m looking for a college that offers Korean courses,” she said.

This year was Mack’s first time visiting the black college fair. Mack intends to further her studies in Korean to enable her to become a foreign language educator.

Organizers for this year’s event awarded 10 students with scholarships valued at $500.

Stewart said the black college fair appears to be shaping up for continued success.

“I see a lot of young adults asking questions, not just walking around,” he said. “They’re interested. The representatives are younger, and I feel that helps with making a connection with the students.”