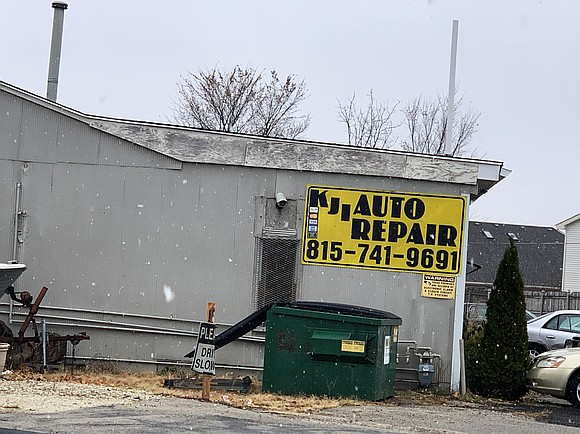 KJI Auto Repair is located off of Plainfield Road in Joliet. (Megann Horstead/For The Times Weekly)

The Joliet Zoning Board of Appeals recommended the denial of a measure repealing a special use permit to allow for the continued operation of an automotive business, located off of Plainfield Road.

No one spoke in opposition to the request at the meeting. The city, however, has received a number of anonymous complaints about the auto repair business. Staff has determined the reasons provided for repealing the special use permit are not unfounded.

“Neighborhood Services has requested [the special use permit] be withdrawn, or repealed, because the business has continually operated outside of their permitted business hours, per the conditions of the special use permit that was approved in 2001,” said Michael Schwarz, director of planning for city of Joliet.

A city memo shows in the last two years, KJI Auto Repair was also cited a number of times for having multiple inoperable vehicles on site and working on vehicles in the parking lot, which is not an allowed use at the location.

Joseph Mazzone, an attorney for the business owner, spoke in defense of his client, saying the complaints appear to originate from two households.

“There’s been numerous attempts by [the business owner,] Mr. Patrick [Bernhard,] to try and meet with these people who refuse to talk,” Mazzone said.

Mazzone wanted it to be clear that KJI Auto Repair is a long-term business and is well-respected in the community.

KJI Auto Repair is located in a B-3 General Business Zoning District near a landscaping business and townhome-style residences.

Aaron's is seeking to relocate to a new Joliet location off of Jefferson Street. The site in question is located right next to Dollar General. (Megann Horstead/For The Times Weekly)

“There have been a number of businesses … shut down in this place,” Mazzone said. “A dance studio, a music-teaching place, and a paint shop, these have and opened closed since these people have lived there.”

The request to repeal the special use permit was previously tabled at an Oct. 18 meeting of the Joliet Zoning Board of Appeals.

Members of the Joliet Zoning Board of Appeals questioned the petition and the need to maintain anonymity, calling into question the sources in which the complaints arise.

Neither the property or business owners attended the administration adjudication hearing scheduled in July to review the matter.

“It is their best knowledge that no notice was ever served on the premises or any place else,” Mazzone said.

In a 6-0 vote, members of the Joliet Zoning Board of Appeals provided a negative recommendation.

The Joliet City Council will have the final say at a December meeting as it regards allowing the automotive repair business to retain its special use permit.

Also at the meeting, members of the Joliet Zoning Board of Appeals reviewed plans for signage as it regards the potential relocation of a rent-to-own business.

Aaron’s would like to set up shop at 918 W. Jefferson St.

The petitioner, Casey Pristou, is requesting a variation on the maximum total sign area and total number of signs permitted in the B-1 Neighborhood Business Zoning District to help allow future operation of the building.

“We need signage in order to have an effective business,” he said. “Otherwise, we can’t operate our business.”

Dollar General is anticipated to continue occupying the larger tenant space, right next to the site in question.

The petitioner also owns and operates the Aaron’s located at 418 W. Jefferson St.

“It is smaller,” Pristou said of the location at 918 W. Jefferson St.

Pristou said this site will better serve Aaron’s and its needs.

“The dynamics of the industry are such that the internet has … made it very challenging for brick and mortar retailers to do business,” he said. “Smaller size is the new reality in retail.”

Schwarz said that granting the variation would make sense in this case.

Businesses situated within B-3 General Business Zoning Districts are allotted 460 square feet for total signage, which would accommodate the petitioner’s request.

In a 6-0 decision, the Joliet Zoning Board of Appeals voted in Aaron’s favor.