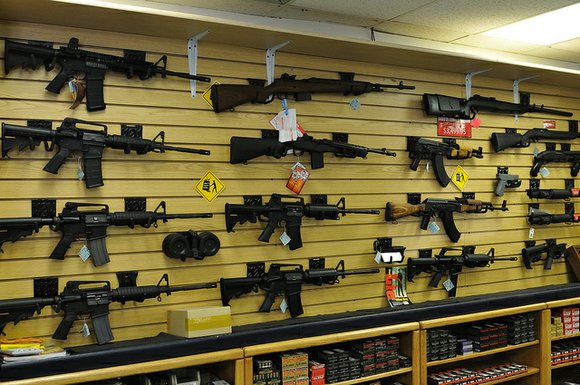 The city of Joliet is looking to roll out gun shop regulations.

Members of the Joliet Plan Commission reviewed the matter at a recent meeting.

“Historically, these types of uses were deemed to be similar to other retail uses, and therefore historically, were allowed without restriction in the B-3 General Business Districts,” said Michael Schwarz, director of planning for city of Joliet.

The Joliet City Council imposed a moratorium in June as it regards the issuance of new business licenses for guns shops. That measure is set to expire next month.

“During the temporary moratorium period, the legal department and planning staff researched and discussed the potential new regulations, including the appropriate zoning classifications where these types of uses should be permitted by right or through a special use permit,” Schwarz said.

Schwarz said the proposed ordinance has language mirroring the regulations currently on the books for tattoo parlors.

No one spoke in opposition to the proposed gun shop regulations during the public hearing.

The city currently has two retail operations that could be impacted by the regulations.

Existing businesses are grandfathered in as it regards meeting the proposed distance provisions.

The regulations, as drafted, will not impact entities that do not require a business license from the city of Joliet in order to operate.

Also at the meeting, members of the Joliet Plan Commission took time to review an ordinance regulating electric fences in industrial areas.

Electric Guard Dog would like the city to lift the ban as one of its clients, FedEx, would like to set up shop at 1965 Terminal Court.

The measure, if approved, would allow electric fences as a special use subject to certain regulations.

“The location [of] electric fences would be for logistics facilities that have outdoor areas,” Schwarz said.

The proposed ordinance does not seek to discriminate among different types of businesses that may apply for special use permits.

No one spoke in opposition to lifting the electric fences ban during the public hearing.

Members of the Joliet Public Safety and Joliet Land Use & Legislative committees have reviewed the matter in recent months.

The Joliet City Council will consider lifting the electric fences ban at its first December meeting.