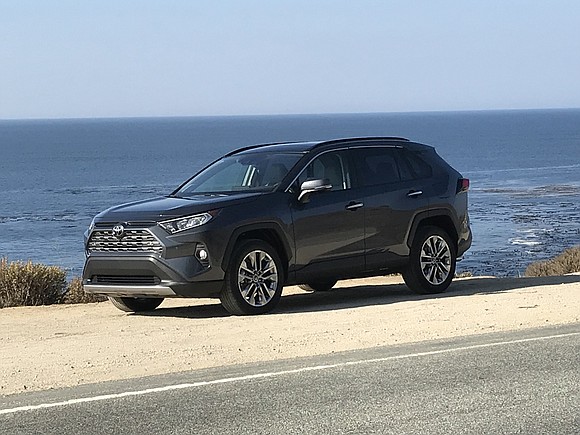 It was 22 years ago that Toyota’s RAV4 first hit these shores. Now comes the fifth generation of the compact sport utility. It was the first such vehicle and it created the market we now know as crossover utility vehicles because if its uni-body construction.

Not only was the RAV4 the first crossover, it is now the best-selling non-pickup truck in the country. In 2017, Toyota sold 408,000 RAV4s. What they’re trying to do with the new RAV4 is make it an all-round vehicle that can handle urban, suburban and the great outdoors driving.

Another way of looking at it is that they want the 2019 RAV4 to be more utility like rather than car like.

To make the 2019 RAV4 look tougher, designers have picked up some design cues from Toyota’s pickup trucks, especially the Tacoma. The front end and grille design was meant to give it an athletic look.

Black cladding around the wheel arches appeared to lift the tires into a higher position much like a pickup truck. The lifted-up body was supposed to make the 2019 RAV4 look more capable. That was the idea.

We were in a convenience store getting our lotto on the drive and an older RAV4 parked next to our test vehicle. The difference was visible immediately. Our RAV4 had a higher hood and a more muscular face. It was just huskier.

Ground clearance was upped by more than a half inch over the model that it replaced. Even though it was higher Toyota said the step-in height remained comfortable. It was easy to get into and out of and the new RAV4 was comfortable.

The front seats were restful; there was plenty of lumbar support. Sight lines were really good especially since Toyota lowered the window belt line, dropped the sideview mirrors farther down on the doors, lowered the dash and added a small triangular window were the side view mirror housing would have been.

The new RAV4’s TNG-K global platform made body rigidity 57 percent stronger. They said the front strut and rear multi-link suspensions enhanced agility. That’s hard to argue with since we did several tight U-turns on the two lane parts of the Pacific Coast Highway near the iconic Bixby Bridge to take photos. It is not a place you want to back up to complete a U-turn.

The new platform was supposed to make the ride smoother and quieter. Indeed, the new RAV4 rode like a typical Toyota. It was smooth and quiet. However, from time to time it did seem like the engine ran like a four-banger of old: a little rough and a little loud. Engineers would do well to add a little more soundproofing to the fire wall and perhaps floorboard.

The global platform allowed engineers to place the powertrain lower in the engine bay and thus, lowered the center of gravity. Of course, high strength steel helped to reduced weight; a new saddle style fuel tank distributed the weight of the fuel evenly sized to side. The previous model had the entire fuel tank on one side of what is now the old RAV4.

Toyota has always been conservative with its engine technology in terms of horsepower. But Toyota power-plants have always been highly reliable and quiet, for the most part. In fact, the Toyota brand was built on the quietness and reliability of its engines.

The 2019 RAV4 gas model, which goes on sale in December, will be powered by a 2.5-liter four cylinder engine mated to an eight-speed automatic transmission. It made 203 horsepower.

The hybrid goes on sale in March and it will be powered by a similar 2.5 liter four cylinder engine but in total it will be tuned for 219 horsepower. It will use an electric CVT and a nickel metal-hydride battery provides electric power. It will have an EPA rating of 41 mpg in the city, 37 mpg on the highway and 39 mpg combined.

The gas model has five grades: LE, XLE, XLE Premium, Adventure and Limited. The hybrid gets four grades: LE HV, XLE HV, XSE HV and Limited HV. All models are available in either front-wheel or all-wheel-drive

What’s more, this AWD system has torque vectoring, the ability to send torque from side-to-side. When all-wheel-drive is not needed, say on long dry highway drives, the rear axle driveshaft’s rotation can be stopped. It reduces energy loss and improves fuel efficiency.

For on road and off road performance, the 2019 RAV4 has hill start assist, trailer sway control and downhill assist control. Depending on trim and powertrain, the new RAV4 can tow up to 3,500 lbs.

On the RAV4 Hybrid models, the AWD system employed a separate rear mounted electric motor to power the rear wheels when needed. It increases total torque to the rear wheels by 30 percent compared to the previous system.

We tried out the system on a moderate off-road course set up here. The RAV4 did well. We selected trail mode and the RAV4 climbed through soft dry road beds with a bit of slippage but nothing serious, it traversed close-set rises lifting the rear right wheel off the ground and hill descent is always impressive to me. More so was that I discovered hill descent worked in reverse as well.

The 2019 Toyota RAV4 has what is called a Predictive Efficient Drive system that reads the road and learns driver patterns to optimize hybrid charging.

I don’t know about learning from driver patterns but the vehicle climbed over hills and went through mountain passes relatively easy.

Driving all around this area, in hybrids and gas powered models, we found both responsive, they were relatively quiet, and handling was good, so was braking.

The instrument panel was a horizontal layout. It was minimalist and the floating infotainment navigation screen dominated. There were not a lot of buttons, switches or dials and there were soft touch points on the dash and the doors.

The passenger compartment had an open and airy feeling. And it would have been a more airy feel had we opened the screen covering the panoramic roof.

The front seats were supportive. The back seats looked like they could hold two adults comfortably, I didn’t get back there. The center console was about 1.5 inches wider and it was a bit higher than in the old model, matching the height of the door armrests. I didn’t notice and that was a good thing, armrests, center consoles or anything else should not distract the driver from driving.

There were heated front seats, the electric parking brake was standard, there was an optional wireless charger and the 2019 RAV4 had embedded storage trays under the dash to hold mobile phones and other travel stuff that were illuminated at night by a blue light.

The rear doors were bigger for easier access, the cargo area had a bit more room, when folded the rear seats formed an almost flat floor, headroom on the new model increased by almost 2-inches and the deck board was reversible. Flip it over and you get a plastic surface for wet or dirty objects or both.

The new RAV4 has three audio systems to choose from. The premium option has 11 speakers and 800 watts. No matter which one you chose they all have Apple CarPlay, WiFi Connect, Amazon Alexa and Google Assistant.

Toyota has been pushing its safety technology of late and the 2019 RAV4 is no different. It has the next generation of Toyota Safety Sense or TSS 2.0. That’s a pre-collision system with pedestrian detection, full-speed range dynamic radar cruise control, lane departure alert with steering assist, automatic high beams, lane tracing assist and road sign assist.

An initial impression is that the new 2019 Toyota RAV4 is a worthy successor to the old model.