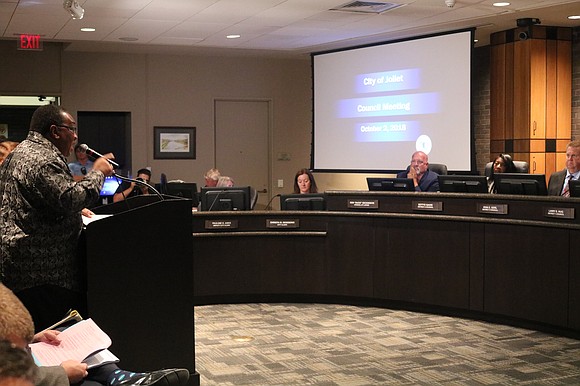 Amid opposition, the city of Joliet decided it would become the home to Love’s Travel Stops and Country Stores.

In a split vote, officials took action to approve the controversial plans for the vacant site at the southwest corner of Briggs Street and Interstate 80. Voting no were Councilmembers Bettye Gavin, Terry Morris and Mike Turk.

The city of Joliet has faced backlash over this $13 million capital investment project at public meetings in recent months.

Adopted years ago, a southside comprehensive plan and its future land use map marks the area in question for commercial use.

More than a dozen people took time to voice their opinions at the Joliet City Council meeting Tuesday.

Warren Dorris, a resident of Joliet and the pastor of Prayer Tower Ministries, said he thinks the whole matter is egregious.

Dorris referenced a letter he had received in which Love’s Travel Stops and Country Stores offered in exchange for $100,000 to annex into Joliet and said he knew this is wrong.

“They wanted to funnel the money through my church,” he said, noting what he says is embezzlement. “I went to the attorney general and the state’s attorney, and they read this. They said had I done this, I would’ve been in trouble with the IRS, my church could’ve lost their 501(3) c, and I could’ve went to jail.”

Dorris said he and his wife had rejected the payment, and they are hoping the city votes down plans for Love’s Travel Stop and Country Stores.

Deborah Cottrell, a current neighbor of Dorris’, spoke during the Joliet City Council meeting, corroborating the account provided by the pastor. Cottrell said she was offered $75,000 to annex into Joliet; she declined.

“It didn’t even come up to what the house was valued at,” Cottrell said.

Cottrell said she is all for Joliet making money, but she questions why officials would want to bring Love’s truck stop to a residential area.

Several residents at recent meetings called into question the city’s ability to provide water and sewer connection to the truck stop.

Corporation Counsel Marty Shanahan clarified that water and sewer services will not be provided by the city at its expense.

A recapture agreement is anticipated to allow the city to recoup an estimated $2 million through motor fuel tax revenue. The amount Love’s Travel Stops and Country Stores is projected to take in is valued up to $2.5 million.

Morris questioned why Love’s Travel Stop and Country Stores would need an incentive agreement the way money has been thrown around to try to force annexations into Joliet.

Some members of the audience at the Meeting cheered in response to the line of questioning Morris had raised.

City staff has said that an economic incentive agreement would be in order, much like they had done for the Speedway off of Laraway Road.

Several residents continued to contend during the meeting that traffic is a concern for the site in question.

Council action, as amended, is allowing for the operation and future build-out of the new truck stop.