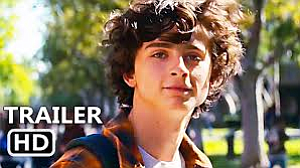 Beautiful Boy as this year's Opening Night film Felix van Groeningen's film starring Academy Award® -nominees Steve Carell, Timothée Chalamet and Amy Ryan received its world premiere this past weekend at the Toronto Film Festival where Owen Gleiberman of Variety raved "Carell and Chalamet both give excellent performances that should help to launch Beautiful Boy into the awards-buzz atmosphere."

Join the festival for Opening Night on Wednesday, October 10. A VIP After-Party with cocktails and hors d'oeuvres will follow at the beautiful St. Jane Hotel!

Tickets start at $25 with VIP tickets (including film and after-party) at $100/ticket.

Ticket and event information is available on our website

Tickets for Opening Night are on sale now

Based on the best-selling pair of memoirs from father and son David and Nic Sheff,

Beautiful Boy chronicles the heartbreaking and inspiring experience of survival,

relapse, and recovery in a family coping with addiction over many years. Starring

Steve Carell and rising young star Timothe Chalamet (Call Me By Your Name),

who delivers one of the year's most stunning performances, this emotional drama

remains full of hope and humanity.

*Passes are not valid for Special and Gala Presentations, Tributes, Opening Night, Special Events, Centerpiece, or Closing Night. All programs are subject to change. Passes on sale until October 21, 2018. Passes will be emailed to purchasers for redemption.

Festival tickets on sale to the general public

Join us as a member of Cinema/Chicago and get early access to Festival tickets!

So far in 2018, members have been invited to advance screenings of Disobedience

Shana Feste and actor Lewis MacDougall in attendance, America to Me with director