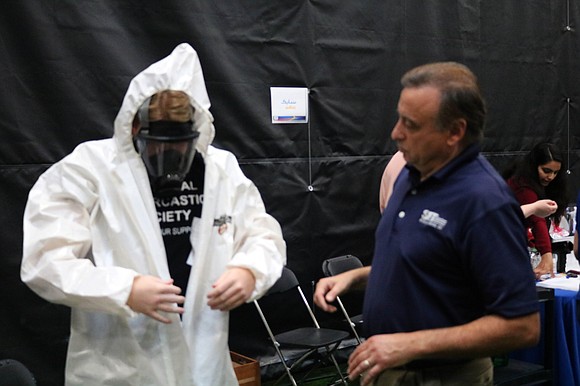 Joliet Junior College professor Mary Sue Gurka (left) guides Minooka High School senior Cole Gerovac (right) in how to use the Fanuc Robotics LR Mate 200 iD/4S during Joliet Junior College's fifth annual Manufacturing Day, held Oct. 9 at the college's main campus in Joliet. The robot is used in a number of industrial applications, including the assembly of parts and welding in automotive.

The event on Oct. 9th introduced high school students not only to technical careers in human resources, finance and computer science, but also informed them of the technical skills needed to secure employment and succeed in the manufacturing industry.

“The more we educate students on what manufacturing involves, the more likely they will gravitate toward related fields of study,” said Amy Murphy, dean of applied arts, workforce education and training for Joliet Junior College.

The event was a partnership between Joliet Junior College and Three Rivers Manufacturers’ Association.

Local students approach vendors to learn more about what they have to offer during Joliet Junior College's fifth annual Manufacturing Day, held Oct. 9 at the college's main campus in Joliet.

According to the Manufacturing Institute, forecasts of economic conditions in the U.S. show that “over the next decade, nearly three-and-a-half million manufacturing jobs will likely need to be filled and the skills gap is expected to result in two million of those jobs going unfilled.”

Murphy said the college is doing its part to help work toward closing the skills gap.

“We have expanded the schools represented in the district,” she said.

Between demonstrations and hands-on activities to giveaways, Murphy said the vendors strive to be engaging for all.

The event also provided students a chance to play a game of “Jeopardy” with their peers, testing their knowledge of manufacturing.

Jim Smith, process manager for Bunge Loders Croklaan, said that participating in Manufacturing Day is worth it.

Bunge Loders Croklaan is the company responsible for making the flavor butter popcorn for the Orville Redenbacher and Pop Secret brands.

“We want to show them we make all types of things,” Smith said. “We are the longtime producer of palm oil. We get it from Malaysia. We process the palm olive through a deodorizer to make frosting, Oreo cream, and confectious treats.”

Smith said that participating in Manufacturing Day is not only good for brand recognition, but also for generating student interest.

“The more people understand what a chemical operator does, the more it enables them to see a pathway where you can make a living to support a family,” he said. “A lot of them are union jobs with an above-median, pay scale with lots of opportunities. Joliet Junior College offers a great process operator program. The instructor, Randy, does a fantastic job with the students. A lot of them get hired.”

Plainfield South High School student Ryan Fernandez said that using the technology available to students at the event was cool.

Fernandez was among one of many who volunteered to participate in a demonstration that involved getting outfitted in personal protective equipment gear.

“That was big and heavy,” he said. “It was fun putting it on. It was for electrical jobs. It protects you from flashes.”

Fernandez said that choosing to participate in Manufacturing Day at Joliet Junior College is worth it.

“I want to go to Joliet Junior College, get my general education courses done, go to Illinois State University, and major in architecture,” he said.

Plainfield South High School teacher Jenni Hogan said that taking her culinary class to the event is helpful for students in more ways than one.

“It exposes them to the manufacturing all in one shop,” she said. “It’s like a mini interview for them but no pressure. If they see something that sparks their interest, they can get more information on the spot.”

Educators at the event were provided packets filled with statistics on manufacturing and activities to tie into the classroom experience.

Hogan said she and her colleagues look forward to bringing students to the event year after year.

“I feel kids don’t know how much goes into making the every products they use,” she said. “They take it for granted. This provides a behind-the-scenes experience for them.”