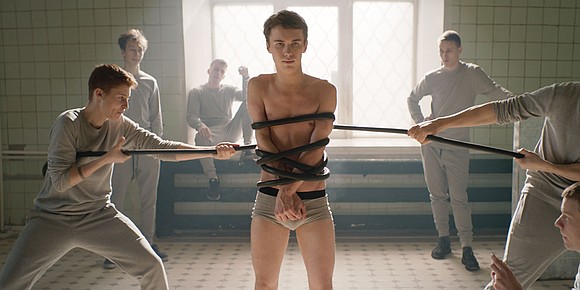 Oksana put her infant son, Denis, into the Baby Hatch at an orphanage. When he became a teenager she went to reclaim him and bring him back to Moscow. Sadly, it was not for love, but for his special talent that made him useful to her and her associates: Denis could not feel pain, which made him ideal to be a jumpman, someone who jumps in front of cars, gets hit, and blackmails the drivers. If they don't pay, they are taken to court. These two elements —numbness and corruption— are the counterpoints of this drama. Putin's Russia is the morass, but corruption has been part of that culture for much longer. Jumpman's corruption is systemic from the police who target the cars to be jumped, the hospital staff where "the victim is taken," the lawyers and judge who try the cases of the marks who don't pay. At first Denis was enchanted by his beautiful mom, having a room of his own, catching up on 16 years of birthday cake and being part of a community. Little by little, however, things stop working, he walks starts to feel pain —physical as well as emotional, and he walks away from the new life. No problem: he is expendable; it is the system that endures.