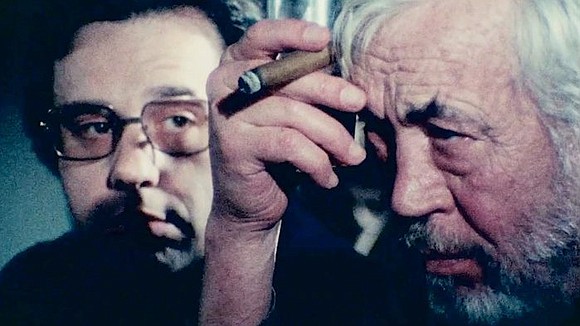 The air was full of great expectation at the 56th Annual New York Film Festival, and every time Orson Welles’ name was mentioned or his credit rolled across the screen he received a thunderous applause as if Jesus himself had come down off the cross. Unfortunately “The Other Side of the Wind,” was none of that. Ten minutes into the film that was cut so fast, with the camera darting in and out of scenes so that one could not keep up, one knew it was substantially less than the hype. And, for about two more hours it kept on disappointing.

The film is noteworthy only that it is the last film that Welles wrote and directed. Hardly ground breaking “Citizen Kane,” this unfinished film was pieced together after four decades by following Welles’ notes. The final product was more like a mishmash of inconsistent themes, plots and sub plots with the Who’s Who of American actors deserving better in which to ply their trade. A satire of Hollywood, this film focuses on the last days of a famous film director named Jake Hannaford (played by John Huston) who emerges from semi-exile to make a comeback while simultaneously being filmed for a documentary on his life. That’s the problem…this so-called masterpiece was trying to do too much at the same time. It was also dated with 1970s clichés and conceits that are so not PC today. It was offensive to watch such homophobic, misogynistic sexism, and racist drivel that had no reason for being other than its shock value. Hannaford, (read Welles), drank too much and was obviously on the edge, which Huston succeeded in conveying.

In addition to Huston, it was great to see acting legends Peter Bogdanovich, Robert Random, Lilli Palmer, Edmond O’Brien, Cameron Mitchell, Mercedes McCambridge, Susan Strasberg, Norman Foster and Paul Stewart. Even though Dennis Hopper was listed, he was not recognizable. And then there was visually striking Oja Kodar, who as the Native American representative in the film appeared naked and speechless most of the time. The most enjoyable experience was Michel Legrand’s musical score. There was a line in the film that pretty much sums it all up. They are watching the rushes of Hannaford’s masterpiece when the projectionist says that some sections were out of sync. Hannaford replies, “It doesn’t matter.” And it doesn’t matter that “The Other Side of the Wind” is out of sync with what we expect of film today. This film, which is distributed by Netflix, opens in theaters on November 2 for a limited engagement with simultaneous worldwide release dates.