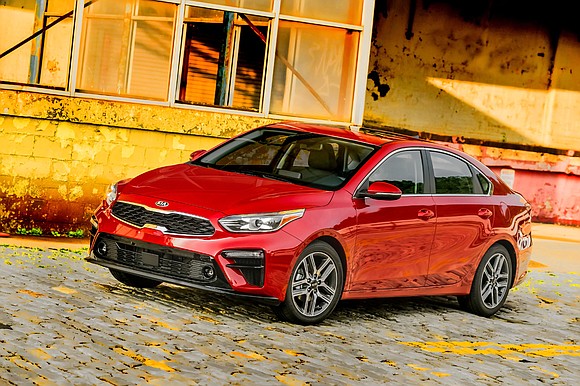 The new Kia Forte flies in the face of the market. It is a compact sedan in a sea of crossovers. However, from 2013 to 2017, Forte sales almost doubled. So there is little choice but to give buyers what they crave — a new Kia Forte.

For 2019, the third generation Forte has grown. It is longer, wider and a tad taller than the outgoing model. What they’ve done is give it a sleeker look, using Kia’s hot new Stinger sport back for design cues. The new Forte had a drag coefficient of 0.26.

There was a long hood, short deck, fastback silhouette, LED headlights that curved into the front fenders, circular vents inside and a floating touchscreen. Kia said the cowl point was moved back five inches, creating a more athletic stance that makes the Forte appear well-planted to the ground. That is a PR little hyperbole but the car did have the sporty look of the Stinger.

Creases in the hood contributed to the Forte’s muscular appearance so did a newly redesigned signature tiger nose grille and aggressive black lower valance. Standard projection or available full LEDs can be had on the Stinger-inspired headlamps, while separate turn signal indicators are mounted near newly designed air curtains that help improve aerodynamic performance.

The rear bumper got the same treatment as the front with separate reverse and turn signal indicators located beneath available LED taillights. Similar to the Sportage compact crossover, a sleek horizontal trim piece connected the taillights.

Under the hood was a 2.0-liter four cylinder engine that made 147 horsepower and 132 pound-feet of torque. It was mated to a continuously variable transmission. Kia called it an Intelligent Variable Transmission or (IVT).

Kia said the engine and in-house-built IVT are the first of a new line of highly efficient “Smart Stream” powertrains that will make their way into the Kia lineup in the future. They said that waiting before developing its own continuously variable transmission (CVT) allowed Kia engineers to research issues often associated with CVTs and apply their findings in the application used in the Forte.

One of the main criticisms of CVTs is that they can create a rubber-band-like feel. In an effort to address that issue, Kia engineers built the IVT with adaptive style shift logic with a chain-type belt instead of push belt. The results of this is a pretty smooth and drone free acceleration.

Noise is another issue with CVTs. Kia engineers wrapped the transmission case in a sound-insulating cover to help quiet the typical “drone” associated with this technology. In doing so, NVH levels in the Forte are reduced by 5dB from the outgoing model.

Indeed, the IVT was quiet. And though it didn’t feel like we were driving an automatic, the car did not feel like it had a CVT transmuting power to the pavement either. The 2019 Kia Forte had some spunk and it did so efficiently.