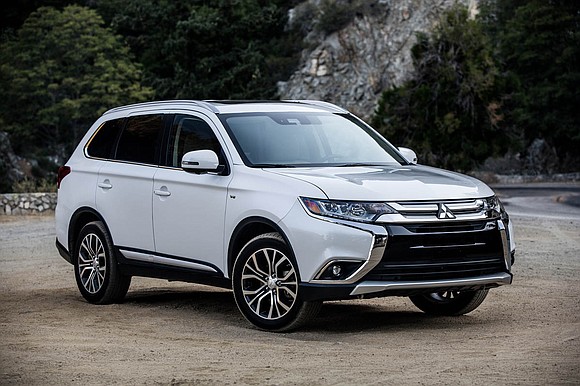 There was a time that Mitsubishi was the technology leader of all the Asian brands and back then that meant Japanese automakers. But bad business decisions disrupted the automaker’s sound footing and put it at risk.

Now the company is being stabilized by a new partner and there just might be some hope. I test drove the 2018 Mitsubishi Outlander and discovered that the automaker has held on to its engineering chops.

The sport utility, read crossover had a 2.4-liter four cylinder engine that made 166 horsepower. It was mated to a continuously variable transmission that was the quietest I have test driven.

This engine made 162 pound-feet of torque. The powertrain moved the three-row Outlander vehicle effortlessly. The CVT was so quiet I had to be sure that it was a CVT so I got down on the accelerator. The powertrain was smooth, quiet and the CVT didn’t make a lot of noise under hard acceleration as most do. That was quite an accomplishment.

This Outlander had an EPA rating of 24 mpg in the city, 29 mpg on the highway and 26 mpg combined.

That comes from Mitsubishi’s Web site and it is an awfully long-winded way of saying the system improves handling. It did on the Outlander. Cornering was sharper, there was no steering lag when changing lanes and driving the vehicle just seemed to me to be more precise. The utility-vehicle was well balanced.

The test vehicle was black. It had black 18-inch wheels and a black cloth interior. The instruments were black with white numerals reversed out and there was some gray stitching and a diamond pattern in the fabric with gray specks. The interior was tastefully subdued.

Instruments were large and easy to see. The odometer and speedometer had a small TFT screen between them. There was an infotainment touchscreen in the center of the dash with a small volume dial. It was so close to the control surface that I kept changing the channel when I tried to adjust the volume. I finally gave up and used the volume control on the steering wheel.

This was a simple layout. Climate controls were under the screen and that was pretty much it. An off and on switch for the blind spot alert was underneath and there was a bunch of mounds where control switches for optional equipment would go but my test vehicle didn’t have much.

There was the blind spot warning and the sunroof. I had heated seats but they were not needed since the heat index approached 100 degrees on two days of the test drive. There was satellite radio, audio streaming from a smartphone and Bluetooth for hands-free calling. I couldn’t open the App suite. That may have been an option that was not on my trim level; I had the LE trim.

One surprising aspect of the 1918 Mitsubishi Outlander was the second row. Even though I thought the seats a little too hard, the floor was just about flat. There was plenty of room and I think three people could sit abreast in relative comfort.

I tried the third row as well. It was a bit much to access the seats. I had to flip the seat cushion up and perpendicular to the back of the front seat. Then flip the seat back forward and climb in. And climb is the right word. Once there, the seat was fine but there wasn’t much headroom. The space was intended for smaller people. But it was commiserate with a lot of third row seats.

My biggest complaint is Mitsubishi needs to work on the Outlander’s grille. The top half was chrome and the bottom half was black, which made it hard to see. In a market where grilles have returned to being the face of the brand, Mitsubishi falls short.