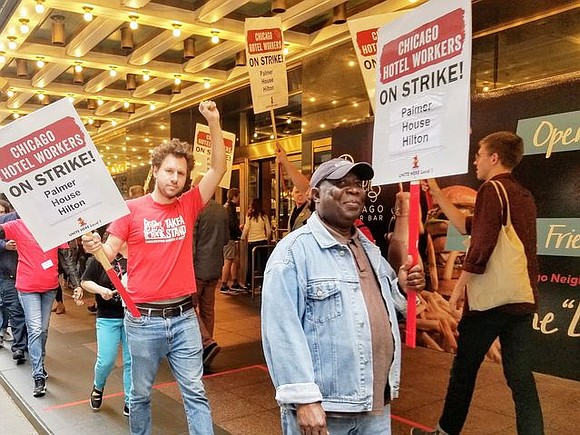 A striking Chicago hotel worker, Kenneth Williams, fought back tears Saturday as applause and shouts of support washed over him at the weekly community meeting and international broadcast of the Rainbow PUSH Coalition.

Rev. Jesse L. Jackson, Sr. moments earlier had invited Mr. Williams to stand with him on the PUSH stage and share the story of the hotel workers’ struggle for rights and respect in the downtown towers of hospitality.

“Workers, when you fight,” Rev. Jackson said, “we stand with you.”

Thousands of housekeepers, cooks, doormen and other workers are striking 25 high-end Chicago hotels for the fundamental human right of year-round health care coverage.

“I represent over 7,000 union workers, who have been beaten down, used and abused by these owners of these hotels,” Mr. Williams told the PUSH audience. “We serve proudly. We clean the rooms impeccably. We pour the drinks. We serve the food. We show people how to get around the town. We’re like ambassadors to our city.”

“I have never been treated so inhumanely in my life.”

Mr. Williams’ union, Unite Here Local 1, hit the picket line Friday, a week after its contract with the hotels expired and negotiations stalled. The major issue is year-round health care coverage for all full-time employees. Some full-time employees are laid off for 3 to 4 months during the slow winter months. They lose health insurance and other benefits during the layoff.

Mr. Williams, who is 59 and the Bell Captain at the Double Tree hotel in downtown Chicago, has been a union member for 36 years. “I come from a proud union family,” he said.

Because of seniority, Mr. Williams was able to wage his recent battle with cancer without the stress, fear and hardship of 3 to 4 months without health care. He lost 30 pounds during his illness and treatment and has no idea how he would have made it if he had been laid off, stripped of his benefits and health insurance.

His eyes welling, Mr. Williams said, “All we want is year-round healthcare. We want to be able to support our brothers and sisters who get sick.”

“We are in the street because we are fighting for respect,” he added. “We need to be treated as we treat others.”

Mr. Williams followed a well-worn path to the Saturday morning community meeting and broadcast. For more than 50 years – from Operation Breadbasket to Operation PUSH to the Rainbow PUSH Coalition – Rev. Jackson and the civil rights movement have fought for the rights and dignity of workers.

In the fateful spring of 1968, Rev. Jackson marched with Dr. Martin Luther King, Jr. and striking sanitation workers in Memphis, Tennessee. In 1980, he shuttled between City Hall and the union hall to help settle the deadly 24-day Chicago firefighters’ strike. He has walked picket lines across the country with teachers, construction workers and longshoremen. He has prayed and fasted for economic justice with farm workers in California, called for diversity in Silicon Valley and descended deep into the Appalachian earth to support coal miners, dying of black lung disease and medical neglect.

Rev. Jackson urged the audience on Saturday to honor the hotel workers’ picket lines and support their fight. At PUSH, he said, “We stand with working people.”