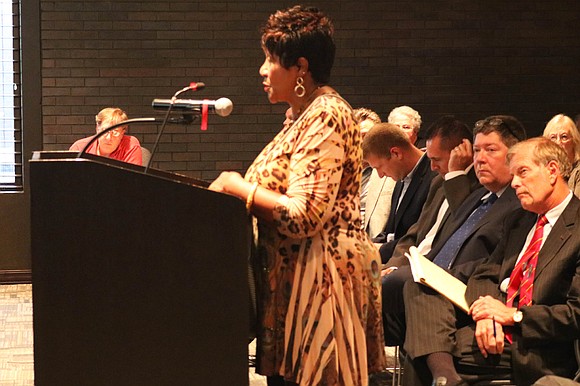 Will County Board Commissioner Denise Winfrey, Dist. 8 deliver remarks on the proposed Love Truck Stop during a special meeting in late August while residents in protest who filled the council chamber listen. The Times Weekly file photo

The city of Joliet could be looking to enact a sales tax rebate agreement valued up to $2.5 million with Love’s Travel Stops and Country Stores.

At a recent meeting of the Joliet Economic Development Committee, officials weighed in on the applicant’s request.

Love’s Travel Stops is seeking a 40 percent sales tax rebate agreement over 10 years for the truck stop, food service station and tire shop it has planned near Interstate 80 and Briggs Street.

“This project has extraordinary costs,” said Derek Conley, economic development specialist for city of Joliet. “This is because of where the project is located. The parcel that Love’s is eyeing for their new business location does not have adequate water or sanitary systems running to the property. Love’s is looking to extend those utilities services to this property to make the project possible.”

The cost to run water and sanitary sewer lines to the site in question is estimated at a cost of $2 million.

Conley said that approving Love’s Travel Stops and its request could create a ripple effect for future development in the area.

The project is estimated to bring in $13 million in capital investment and create more than 60 full-time positions and 100 union construction jobs.

“This is very similar to the Speedway agreement that was approved last year at Route 53,” Conley said.

Speedway has since opened up vacant properties to the west of its site for use and helped improve an intersection at Route 53.

Councilman Terry Morris questioned how the two deals are similar.

Deputy City Manager Steve Jones said when Speedway approached city staff they wanted to do business in town from the start, much like Love’s Travel Stops.

“They had to build all this infrastructure,” Jones said. “The question was would the city do the sales-tax sharing? … The state delay happened, and then they said, ‘We’ll do the whole thing ourselves.’ That’s when they started talking about the costs going up and us raising the rebate.”

The city has been in talks with Love’s Travel Stops for approximately a year, to date.

Steve Matter, a resident of unincorporated Will County and a former negotiator, said he does not want citizens to be on the hook for the sales tax rebate agreement.

“We’ve seen this all the time,” he said. “It’s corporate welfare.”

Jones said there is nothing to be rebated back to Love’s Travel Stops, should they decide to leave the city prior to the end of the agreement.

Matter questioned how the city of Joliet could accommodate the request, saying that it remains unclear how staff and elected officials are weighing alternatives for a future water source.

“They don’t even know if they can supply the water they got for the city, let alone all these expansions you’re pushing all over the countryside,” he said. “There’s no contingency that I’ve found anywhere in place for a secondary back-up.”

Jones responded, saying that an alternate water source is being planned for.

Love’s truck stop, if approved, is anticipated to be complete by the end of 2019.

In a 2-1 vote, the committee decided to advance the applicant’s request for a sales tax rebate agreement. Voting no was Morris.

The Joliet City Council will have the final say on Love’s Travel Stops and Country Stores and its plans next month.

The matter was due for review and consideration at this week’s meeting of the Joliet City Council.